You are using an out of date browser. It may not display this or other websites correctly.
You should upgrade or use an alternative browser.
D

Map Name: KFO-RE1-Mansion-V2 (updated February 2015. Originally this thread was for KF-RE1-Mansion-Story)
Release: Final
Map Style: Objective mode, scripted spawns for extra challenge
Waves: 6 + boss wave
Map Size: 18MB
Whitelisting: I will try, but I don't know if it still gets looked at when there are custom scripts

Regular wave based version here - if that's all you're after

Well after about 4 years since the original was released, Objective mode is finally done!

Changes with Objective Mode:
-Uses Objectives and Story lines complete with Resident Evil character mugshots
-higher variation of monster spawns thanks to Fallidel's Trigger pack
-choose your zed skins at start of map
-ammo is no longer a problem, pick up one box to completely fill your ammo. To compensate, the map is now rock hard
-more loadout options since all weapons are available to all classes, and grenades are optional, so you start with 0/15 weight
-Fel's chaingun
-Extra wave since the original story map, and most waves have something cool/extra in them. You will see.


General Information
Follow Chris, Jill and Wesker in an epic escape from the zombie infested mansion!

This is a Story map, there are a lot more enemies to kill than ordinary wave based map; the exact number is fixed and therefore the more team mates you have, the better your chances of taking them all down.
Solo - not recommended
Beginner - Recommended Small Team, or sub-lv6 perks -
Normal - Full team of good players -
Hard - hardcore veterans looking for a real challenge
Suicidal/HoE - Nobody unless you think its funny to die on wave 1 -

Instead of getting to the trader at the end of the wave, you have to find the "Weapons Room". Decide amongst your team who is going to carry what and arm up to the teeth! Melee weapons may be essential on harder difficulties, as less ammo will spawn the harder the difficulty.

TIPS:
-Pull your weight and kill a lot of zombies or your team will get overwhelmed. Stick with the team, don't lone wolf it.
-Check ALL rooms and nooks for ammo caches and possibly weapons.
-Ammo won't be a problem, but choose your guns before you pickup any ammo. Try and use a lot of ammo and your explosives before you pick up your next box.
-Pay attention to the GO--> signs and 'Door Closing' warnings. These are there to make it easier to know where to go, you aren't being particularly clever if you ignore them. If you find yourself cut off and trapped unable to do anything, don't say you weren't warned...
-Sometimes the way to go isn't blatantly obvious. However, rather than standing in a group complaining 'where do we go?' just walk around whatever hall you are in, and you should find the way. Remember, although most doors are locked, SOME doors can still be opened/welded.
-The gallery/grenade sequence is back in wave 6, but running out of grenades shouldn't be an issue. I even provide a couple of Orca launches which do the job too.

MUSIC FOR THOSE WHO ARE INTERESTED
You can get Resident Evil music from this thread by bowsercoopa. It is a big download of ~150mb (which is why I didn't want to include something like this with the map), and it will replace the music on all maps in game. But I love it, brings back more RE memories

There is also a 'Wesker theme' for the Patriarch that you can get on workshop.
Last edited: Apr 16, 2015
Reactions: Krausier
D

Thanks to Beartbear for a full run through set of youtube vids! Here is my fav, scroll down to Beartbear's post for the rest of the series 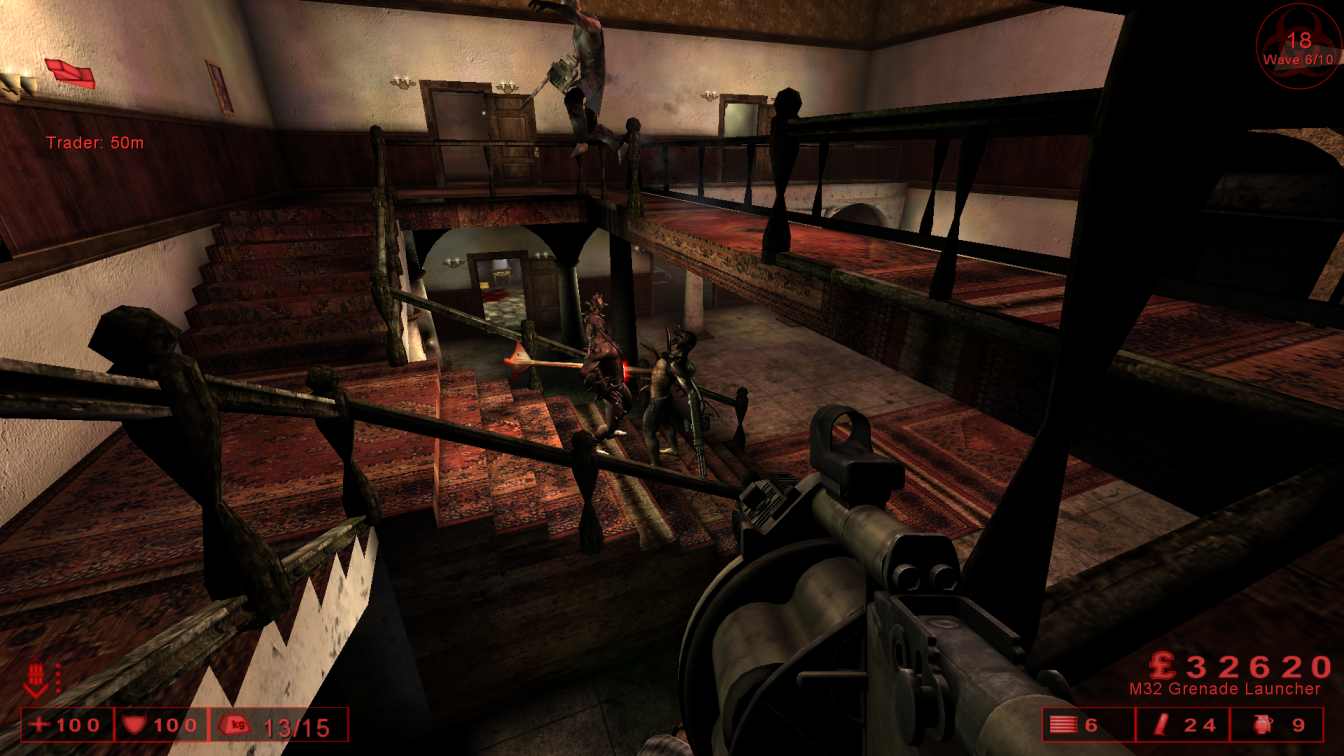 Did you use the music I sent ya some time ago?
D

Did you use the music I sent ya some time ago?
Click to expand...

man sorry I couldn't really use it in a way that fit properly, so I figured it wasn't worth the large extra filesize required for the map. Thanks for your help though!
B

Played through on beginner and threw on god mode after a few hundred kills to make sure I could go through it all the way. Was very nice, but there were a couple weird problems. During the cut scenes my character could move and it showed his arms on the cut scene and then I myself could turn so I would see my character and zoomed in versions of his arms. Enemies still attacked during cut scenes so I had to swing/shoot wildly. Lastly the chopper blades didn't rotate, but that is just visual.

Overall though, I have been waiting for this map for a very long time and am quite pleased with it. Thank you so much for the great game!!! It took about an hour and fifteen minutes with some slacking.

EDIT: Just saw in one of your post that you knew about the weapon/arms thing. Just means suicidal will be harder....lol.
Last edited: Jun 15, 2010
D

Bronzen said:
Enemies still attacked during cut scenes so I had to swing/shoot wildly. Lastly the chopper blades didn't rotate, but that is just visual.
Click to expand...

The design is that there shouldn't really be enemies during the cutscenes. The early one with the scrake should end just before the scrake is in attacking range. Other than that, I guess it would be possible to run ahead and trigger a cut scene while monsters are still alive. Do you think thats what you did on god mode, or was it more unavoidable that they spawned during cutscenes?
M

This is one of the few playable mission maps on servers with >6 players. The number of specimens and the type of specimens that spawn were chosen well. Players notice the gradual change in difficulty, which allows them to prepare for what's to come. There's a sufficient amount of weapons and ammo for all players no matter what perk they choose. The cutscenes are unique and jaw-dropping. They provide good transitions, which create a natural flow to the story. All these elements, with the inclusion of puzzles and crests, immerse players in the storied resident evil series. Keep up the great work.
K

that first screenshot is epic.
D

Wow thanks for the great wrap chainsaw you make me blush, I think some parts of that were a little too kind though

After playing through last night I found the ending is a little buggier than I realised. Playing cutscene after 3rd person patty kill = fail. But its kinda functional. Btw if players stick around a minute or so after patty dies there's a special challenge in store for you...
B

Well it was my 2nd run through that I had problems with. I would go into an area as soon as it was open and with one of the crests I got attacked during the cut scene. They might have been left over monsters or something. I will check it out again later tonight. But it is a lot of fun, even solo.
T

We started at suicidal... but after 2nd failed attempt for the purpose of making that "movie" decided to go down to hard...(and we failed on final, but maybe some other time )
So here U go:


Finally we gather to finish this map with happy ending. Difficulty: Hard

One thing I noticed (Im not sure if youve done something about it or not) is that the specimens seem to be able to move during the cutscenes. So basically, if theres some left when you trigger a cutscene you would die.
D

Wow Beartbear thankyou for that supreme effort! Ideally I wanted about 3 mins of just some highlights but I did browse through all your vids and liked it. I reckon you guys could have used a firebug on your team.
Also isn't it funny how since the T3 Weapons patch, most players who do so well in the waves can just utterly fail vs patty? Essentially this means all standing in a huddle and unloading with T3 weaps and pipes which often works on well known maps but if the patty survives that initial onslaught I've noticed most teams fall apart real quick these days. How about Finding a decent room to fight him in, one that has cover to run around. On this map I reckon Main Hall is the place to head to. Also lets all remember that patty's attacks can be avoided to an extent, its rarely a good idea to say 'screw this I'm just going to katana him'. Thanks again for your support!

HateMe is right about the cut scenes, but tbh it shouldn't happen unless your team is trying pretty hard to avoid killing the last batch of zeds then running ahead when a door opens to trigger the cutscene.
1

Playing support on this, I was a little wary of going into the room with the broken shotgun, wasn't sure if you would've put in the collapsing ceiling or not. Think I got stuck or left behind after the cinematic of Brad trying to defend the heli. Had a few laughs from the characters ripping on Jill though, was almost like the map was setup for an MST3K episode.

I gota say this map is really well done and alot of fun, played this on my clan server [}{]KFL 32 Player, had around 10+ people awesome times. I recommend all server to have this map don't put it off, he's put soo much time and effort into this map don't want to let this go to waste.
D

Demon_333 said:
I gota say this map is really well done and alot of fun, played this on my clan server [}{]KFL 32 Player, had around 10+ people awesome times. I recommend all server to have this map don't put it off, he's put soo much time and effort into this map don't want to let this go to waste.
Click to expand...

Believe me its not going to waste Every now and then I sort the global server list by map and scroll down to this one. There is nealry always a server running it with people on it. So I'm happy. Could only be happier if someone from Capcom wrote me a letter lol.

We also found out on Demon's server that if you set the wave number to 5 (as in 5 waves + boss wave), you get a cleaner ending on this map, you actually get the 'survived message' while the final cutscene is playing. On a typical 10 wave server, you get something of a endless/survival challenge after the last cutscene, and the map isn't technically winnable.
J