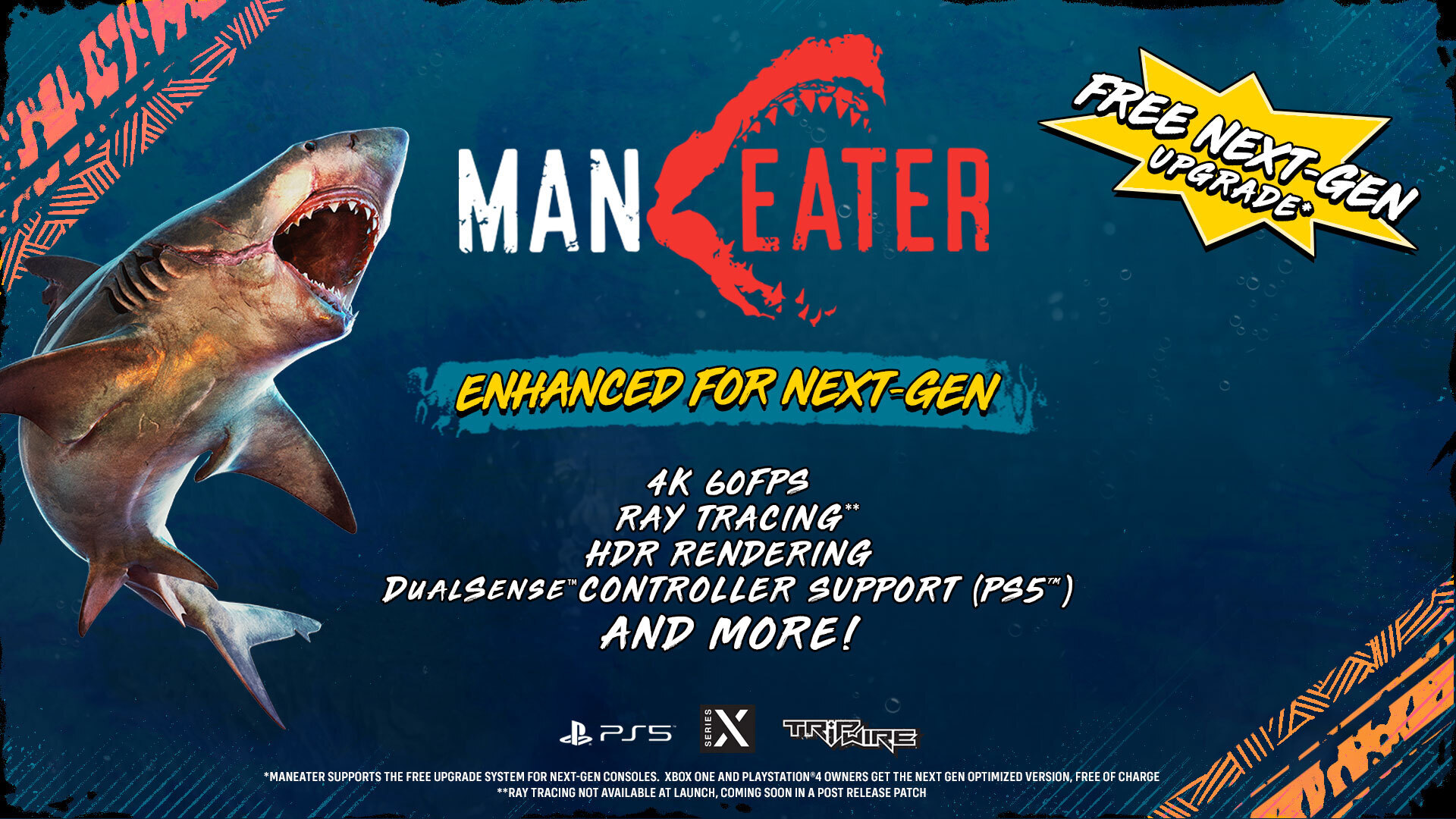 Out now on the PlayStation®4 computer entertainment systems, Xbox One, Xbox Series S, Xbox Series X, and PC (via the Epic Games Store)—and very soon for the PlayStation®5—Maneater invites players to experience the ultimate power fantasy by controlling the apex predator of the seas—a terrifying shark!

Maneater is a single player, open-world action-RPG (ShARkPG) where YOU are the shark. Starting as a small bull shark pup you are tasked with surviving the harsh world while eating your way up the ecosystem. To do this, you will explore a large and varied open world encountering diverse enemies -- both human and wildlife. Find the right resources and you can grow and evolve far beyond what nature intended, allowing the player to tailor the shark to their play style. This is fortunate, because to get revenge on the cruel fisherman that dismembered you will take evolving into a massive shark, an apex predator of legends. Eat. Explore. Evolve.

Fully Evolved for Next-Gen Consoles: Gaming’s new queen of the deep will return more powerful than ever in the next generation of gaming. Full utilization of next gen hardware including native 4K HDR support at a silky smooth 60 FPS, lush new lighting effects, immersive feedback via the PlayStation®5 DualSense controller’s haptic motors, and more will put players in control of the apex predator of the sea like never before.

Evolve Into a Legend: Unlock and equip various Evolutions that improve and enhance your shark as you progress through the campaign.

Unique Story: Play through a full narrative, story-based campaign narrated by Chris Parnell (Rick and Morty, Saturday Night Live, 30 Rock) and set against the backdrop of a reality TV show.

Diverse, Compelling Combat: Battle fierce wildlife including other apex predators or fight against various types of human hunters ranging from town drunks all the way up to the Coast Guard.

With a truly unique premise and never-before-seen approach to the action-RPG genre, Tripwire Interactive looks forward to taking players on a journey through uncharted waters with Maneater.

In Soviet Russia, Yoshiro is a cake
Staff member
For more details about the next gen upgrade see the FAQ here: https://forums.tripwireinteractive....olves-with-next-gen-enhancements-faq.2336583/

For details about known issues see this post: https://forums.tripwireinteractive.com/index.php?threads/maneater-known-issues-psa.2335719/