Rocket trail for the call in bombardment similar to how a command triggers flares, or just as a separate particle fx that can be placed in maps for atmosphere similar to 55 second point in this video

IDK, that doesn't look anything like the Katyusha RS-132 rocket. They used a nitro-cellulose/TNT solid propellant for that unique scream.

Also only achieved about 340 m/s. If fired with a max rail incline of 45 degrees for range of 6-7 km, the descent would still be a ballistic curve after the estimated 12 second burn (4km), with no "flare" like in the video.

I found reports of anything from a 1 to 2 kg warhead being used, so the blast radius would only be 10m at most.

That and the tactics were to get within 3 km for accuracy, and the unspent propellant adding to the incendiary effect. Rockets would then approach targets with a flatter trajectory. Unless, of course, they're launched from a Il-2... 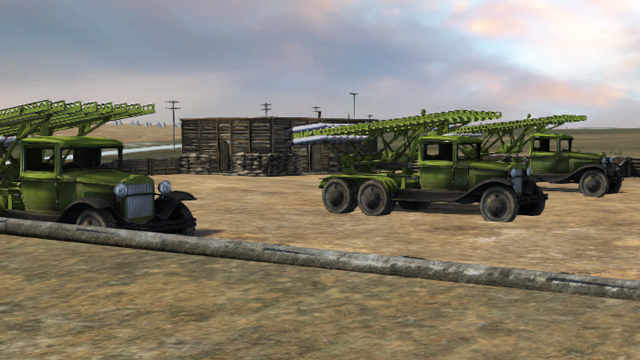