You are using an out of date browser. It may not display this or other websites correctly.
You should upgrade or use an alternative browser.
L

After looking through numerous books and papers, I have finally finished conducting my research on this.

Purple Heart Lane
Lt. Col. Robert G. Cole from San Antonio, Texas and his 3rd Battalion. On the early morning hours of Saturday, June 10, 1944 began sending troops across the Douve in pitch darkness with I Company leading the attack. A crude temporary bridge had been constructed spanning Bridge 2 made out of fencing and planks in the area. Following I Company were G, H, and HQ company of the 3rd Battalion. The N13 was a solid, elevated road embankment which provided little concealment, on this road were four bridges which spanned across four rivers: Bridge No.1 crossed over the Jordan River at the Northern End. Bridge No. 2 over the Douve River had been destroyed by explosives on June 8. Bridge No.3 crossed a small stream known as Le Groult. The final bridge leading into Carentan was Bridge No.4 which crossed over the Madeleine River, the Germans hadplaced a steel roadblock obstacle known as a "Belgian Gate" on the bridge.

Before the battle Hitler had ordered the 6th Fallscrihmjager Regiment to defend Carentan to the last man. Colonel Von Der Heydte decided to make his stand above the town, just below Bridge No.4, he deployed his 3rd Battalion in the swampy flooded fields on both sides of the N13 road. The little islands of dry spots in the swamp had provided little cover for the Germans as well.

After daylight the men of the 502nd strung out along the N13 road were sitting ducks from the Germans shooting at them from both flanks. Unable to dig holes in the solid road embankment, the troopers inched forward hoping they wouldn't be shot. One trooper ran across from the west side of the road to the east running in a crouch then flopped down on the road, he asked the man in front of him, "Is it any better on this side of the road?" "Be damned if I know!" he answered. A few minutes later the trooper ran back to the west side of the road where he started saying, "Hell! It's worse on the left side than on the right!!!!" The Americans grew more frustrated and angry with each passing hour, the stretch of road above Carentan was giving the name Purple Heart Lane. The memory of most survivors were of seeing the bodies of dead and wounded American paratroopers lining the road for hundred of yards. It was difficult to return fire at the Germans who were well hidden behind small clumps of bushes.

While attempting to return fire, Lt. John Larish of I Company was shot between the eyes. Captain Clements almost had his nuts shot off when a bullet crazed his thighs exclaiming, "I thought that SOB got the family jewels!" Had air support been giving, it would've averted many friend casualties. But Carentan was gonna be taken the hard way. During this attack, on the night of June 10/11 two German Stuka Dive Bombers came down the road strafing and dropping bombs on the men.

Because of the heavy losses inflicted on the 502nd during the approach to Carentan, the fighting that developed was savage and little quarter was given to any Germans attempting to surrender. Once clear of the helplessness of the causeway, it became payback time for the troopers. They rampaged against the enemy as much as the survivors had done after the relative invulnerability of the parachute landing. "It's been bloodthirsty!" a corporal told Stars and Stripes reporter Jack Foster shortly after the bayonet charge. Warren Shook recalls seeing German prisoners of the 6th Fallschrimjager Regiment fling themselves on the ground, crying, because they knew they were gonna die. " Hitler taught 'em everything except how to surrender and how to accept defeat," says Shook.

After squeezing men one at a time through the Belgian Gate at Bridge No.4 in the predawn darkness of Sunday, June 11, 1944, the 3/502nd regrouped and prepared for a renewed offense in daylight.

Why was it called this you may want to know,
Well "Jerry" was there to give us his show.
He had mortars, machine-guns, and 88's too,
With plenty of armor to back up this crew.
Then there were snipers that we could not see,
They kept firing at us, my buddies and me.

We had laughed at crawling, keeping close to the ground,
But we did it and liked it right up to the town.
Then came the charge that led to their guns,
We beat back those "Jerries," those invincible huns.
Invincible they say and they weren't far wrong,
But we made them sing another sort of song.

The long battle was over, we trudged up the hill,
There we paused to look back at our comrades so still.
We think of the boys who died not in vain,
Our pals, Yes, the heroes of Purple Heart Lane.

Cole's Charge.
Before Lt. Col. Cole's immortal bayonet charge, he stood in plain view of the hidden enemy, bellowing orders in his usual loud voice, deploying his troops. He yelled out to his men, "These goose-stepping Heinies think they know how to fight a war. We're about to learn 'em a lesson!"

The USS Texas started its smoke barrage on the field which was followed by a whistle. Not all present jumped up and charged upon the signal, but just how few men charged that day will never be known for certain. Dick Ladd of H&H S-2/502 was in an aid station made in a French building on the west side of the N13 road on the afternoon of June 11th. He talked with Bob Brigham, a wounded member of H&H who had been brought up after being hit beyond Bridge No.4. Brigham told Ladd, "About 25 of us had a bayonet charge this morning with Colonel Cole; you shoulda been there!" Brigham died later that day.

Cole's charge did secure the morning's objective and won him a Medal of Honor. A German prisoner who had been on the receiving end of the charge told war correspondent Robert Reuben, "They charged like wild animals. They screamed and shouted when they charged into our fire. It was unbelievable!"

A hard's day of fighting ensued in the Cabbage Patch which was captured by the 1st/502nd. Desperate fighting around the apple orchard beyond the Ingouf Farmhouse raged until midday. A brief truce to request a German capitulation and to collect wounded took place, followed by a furious resumption of the fighting.

Lt. Homer Combs of B/502nd who took a small group toward the railroad line, where they fought a furious defensive action. In a private war of their own, they fended off German counter-attacks from the west during the late morning of June 11th. Lt. Combs died later that day. After the truce, Homer brought his reduced squad over to the N13 area, during a German counter-attack, Combs was shot between the eyes.

1st Lt. Melvin Spruiell , forward observer for the 377th had participated in Cole's Charge acting as an infantry officer. He led a group of troopers who were unknown to him and knocked out several enemy fortifications and machine gun nest. He was killed in action.


Lt. Delmar Idol of A/502nd was shooting at Germans in the Cabbage Patch with his M1A1 Thompson, "It was just like shooting at rabbits and just as hard to hit them!" The trooper besides Idol had his helmet blasted off by several German bullets, but was not wounded. When the trooper picked it up to examine it, it had a hole in the right side and a hole in the left side. "Damndest thing I ever saw, the bullet hit both sides of his helmet, but missed his head in between!"

In a desperate test of will, the German and American parachutist fought to a standstill all afternoon. Forward Observer St. Julien Rosemond of the 377 PFA Bn called for a barrage which landed almost on top of the American lines, breaking up the last German counter-attack of June 11. 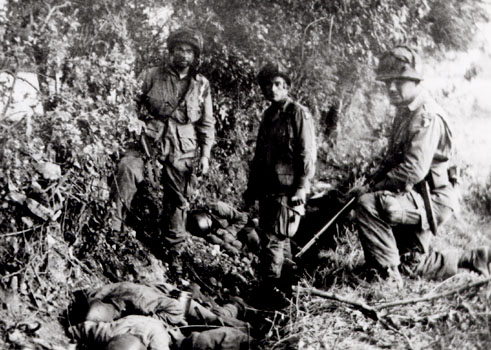 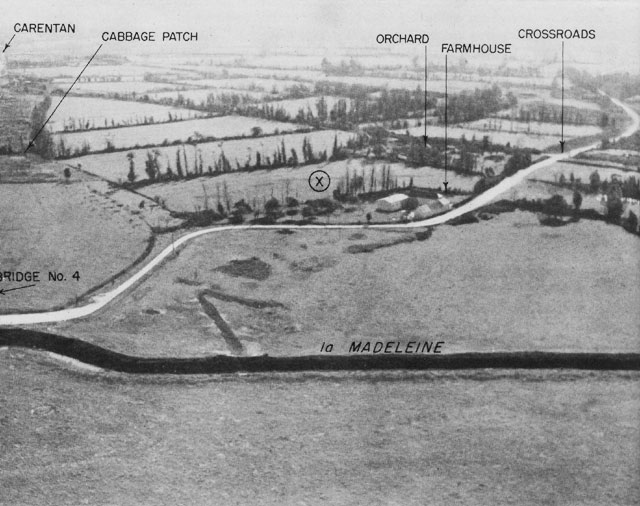 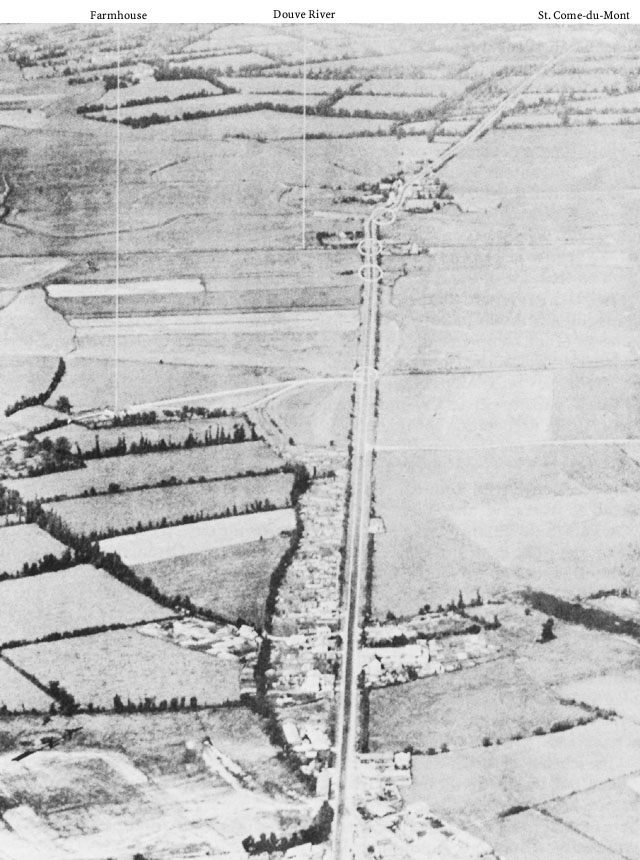 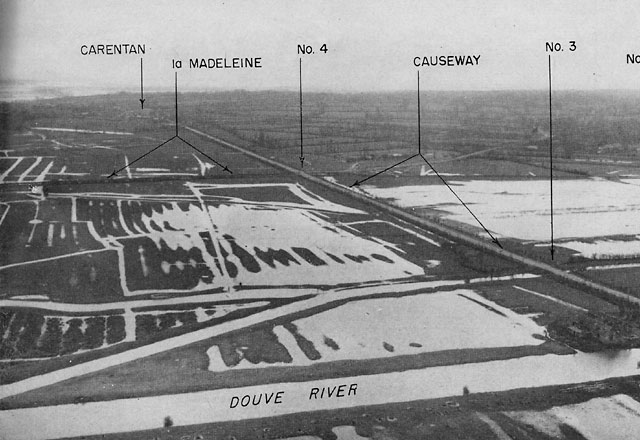 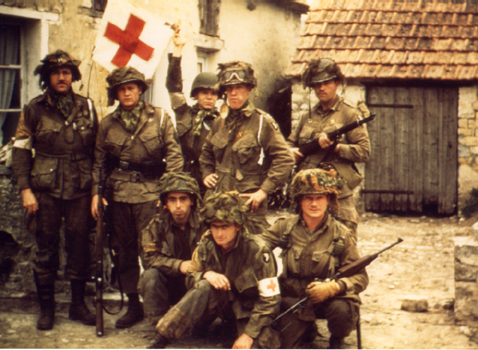 Really good level of research there - bravo!!! Big thumbs up for that.

Ever considered doing some research into the eastern front? What, with this being RO-Ostfront, and all
http://www.panoramio.com/photo/1127720
Last edited: May 11, 2007

In fact, the events around this area have been been the subject of a map by the Forgotten Hope bf1942 mod in their "Fan mappack #6", where it was called "Attack on Carentan":

Thanks guys. Also, love the Forgotten Hope Mod, hopefully their working on that map for BF2 as well.
1

Hi.
I'm the guy who made the Attack on Carentan map for FH mod, I'm glad you like it. If any of you tend to visit FH forums you may recognize me as the person going under nickname "pvt. Allen". One of the FH devs apparently found this discussion and was so kind to link me to it.

Nice job on research Lt. Stephenson! I see you've found some photos I never came across, aswell as have some detailed information on the battle itself which isn't that easy to find.

I still have some of the material I used to recreate my map (mostly googled maps and photos + some bonus content from game: Brothers in Arms: road to Hill 30), so if you are interested I can share it with you. Also, after I finished work on my map I came across this website, it has a very nice write up on all the events from the battle. It's a shame I didn't find it eariler, as I aimed at making it as realistic as possible while FH devs were making sure it'd still be playable. : P
Finally, if you're interested in my map itself, here's a link to my original thread on it, where I was posting about my progress. And here are some screenshots from the final version: 1 2 3 4 5 6 7 8 9 10 11 12 13 14 15 16 17.
M

Attack on Carentan was one of my favourites from MP6. It was a real work of art, Pvt Allen - hope you're going to be mapping for FH2 when it eventually comes out (some time this century, hopefully).

I remember some great games on the Wolf and Damned Priest servers as Allies, forming up on the side of the causeway for a desperate charge towards the Axis trench line and gun positions before the orchard. Without teamwork you were screwed, but with teamwork (short runs to cover, nades and covering fire) it was fantastic.

This is a great map, 1half-lifer! The attention to detail in the maps from mappack 6 always fascinated me... Could you be persuaded to try your hand at RO-mapping? Perhaps the Darkest Hour team would love to add this!
D