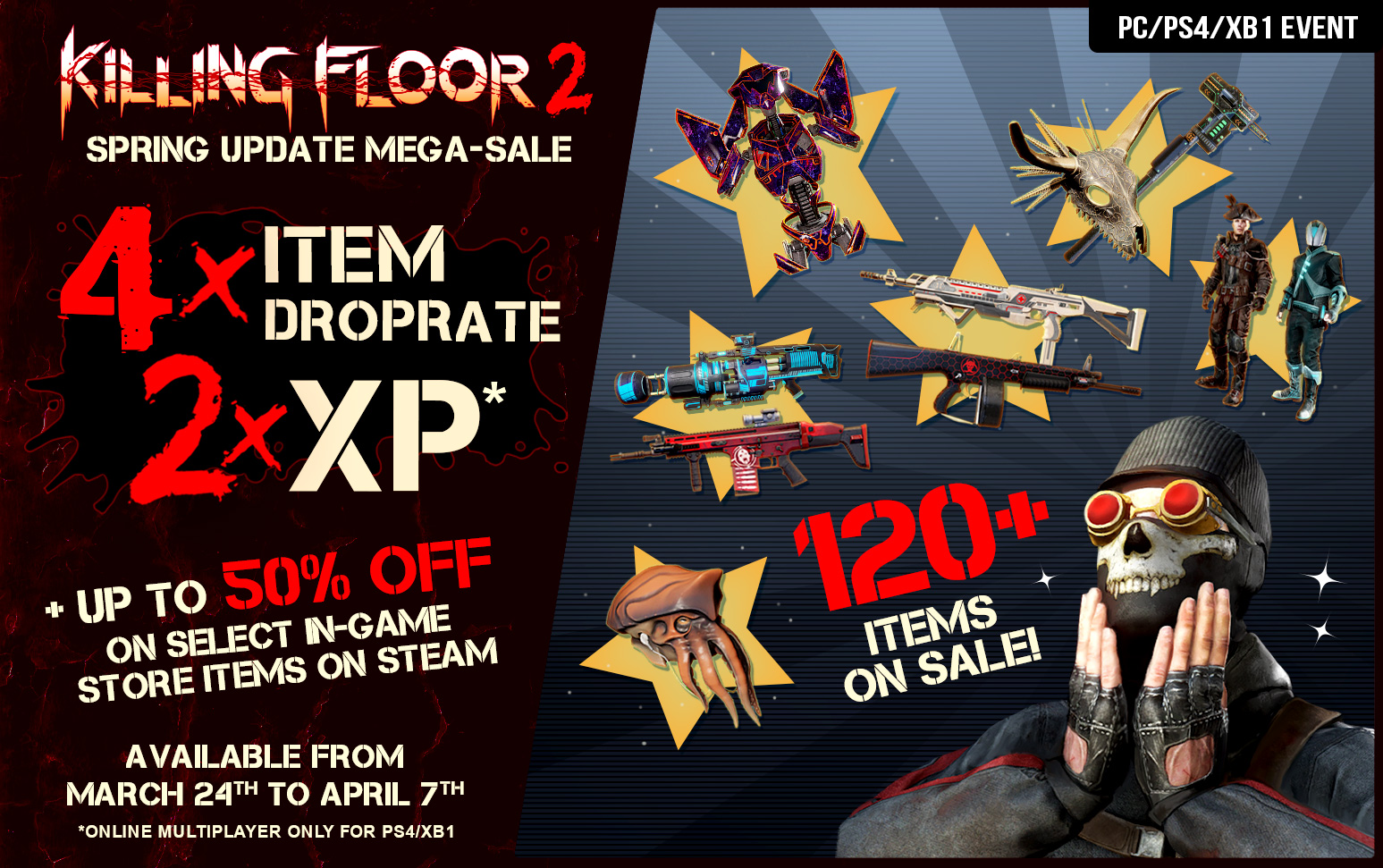 Expect no sale for us Console Heathens, I take it?
Reactions: LunaticMaster

So do we PS4 players also get that Mega-Sale?
Doesn't seem like it after i opened the Playstation Store and saw no KF2 items in sale. :/

On console we have to join sales opportunities that are made available to us, and during those times we generally have a limited amount of items we can list.
Reactions: TheWaywardKid

TheWaywardKid said:
Expect no sale for us Console Heathens, I take it?
Click to expand...

Darn. I would grab the Compound Bow and both Jaeger Packs at the sale prices, but even that's already a little rich for my blood. (I'd accept the price partly to reward/support the devs, and partly to put my money where my mouth is; I did say I'd buy the Jaeger packs if they started releasing more en masse.)
But I play on Xbox due to my friends, so... I guess I'll have to wait.
Reactions: LunaticMaster

When are you going to update the game to use more than two render threads? Or to allow the FPS to exceed 60? Or to give us Anti-Aliasing that isn't horribly blurry? Or to allow us to set the render scale above 100%? Or to add VR support so those of us with VR headsets can play with our friends who don't?

I know Killing Floor 2 is getting old, but if you want to sell all of this stuff you're promoting then the game needs to be worth playing, and the last time I opened it I just closed it again right away because of the capped framerate and blurry FXAA.

Wdym exceed 60, it can already do that.
Just enable variable refresh rate in the video options.

For VR you already have incursion.
Reactions: infntnub

s5yn3t said:
Wdym exceed 60, it can already do that.
Just enable variable refresh rate in the video options.
Click to expand...

Is that new? I checked in January, and I couldn't find a way to uncap the framerate of the game.

Got any solutions for the horrible FXAA the game has?

s5yn3t said:
For VR you already have incursion.
Click to expand...

People with VR want to be able to play co-op games with their friends, and there's a lot less value in games that only allow you to play with other VR players when we all have friends who don't have VR systems. Incursion was interesting, but it doesn't have the same replay value that Killing Floor 2 did, and it certainly has a lot less appeal.

New? That button was there since day 1 of the early access.

And i honestly doubt the VR will ever come to the game for an obvious reason: too much resources must be poured onto making kf2 work with vr.
If the updates are being lack luster already, i doubt they would be bothered making kf2 vr compatible, just to appeal a very small % of people who own vr hardware.

Also with anti aliasing there's nothing that can be done. It's how EPIC implemented it into the unreal engine 3 and devs can't do anything about it.

s5yn3t said:
Also with anti aliasing there's nothing that can be done. It's how EPIC implemented it into the unreal engine 3 and devs can't do anything about it.
Click to expand...

Even SSAA or a resolution scale of 200% would be fine, because this game isn't exactly very demanding. But FXAA is always blurry, no matter how well anyone does it, and isn't worth the low performance cost.

This event has been extended until April 7th! The image has now been updated to reflect that, but here it is again:

Hell yeah! More XP grinding for me!
Thank you developers.
I

Thanks for extending the event! Given what's going on in the world right now, it's a really good move.

quick question, probably asked a million times, will players ever be able to get the dar armor again? like the original ones that were shipped with endless, they're the best looking ones and the ones most people want but they've been unobtainable since that event ended
B