Smells like flowers and a bit like pine needles. Taste quite sweet, I think a combination of grass, citrus and honey. Very nice and easy to drink. Belgian beers are a bit "hit or miss" for me, this is definitely a hit. I shared this 0,75 liter bottle, but it would be quite easy to drink the whole bottle alone

I know this one, I even found empty bottle in my cellar Without a doubt a little of american hops can add a richness of refreshing experience to a Belgian tripel, a beer style that rather not fancy for me. Today I drank a porter from Ł


Last night at Ale Arsenal in San Carlos, I found on tap Firestone Sucaba 2013 Barleywine. A two-year-old barleywine on tap!!! It was delicious, a rare treat. 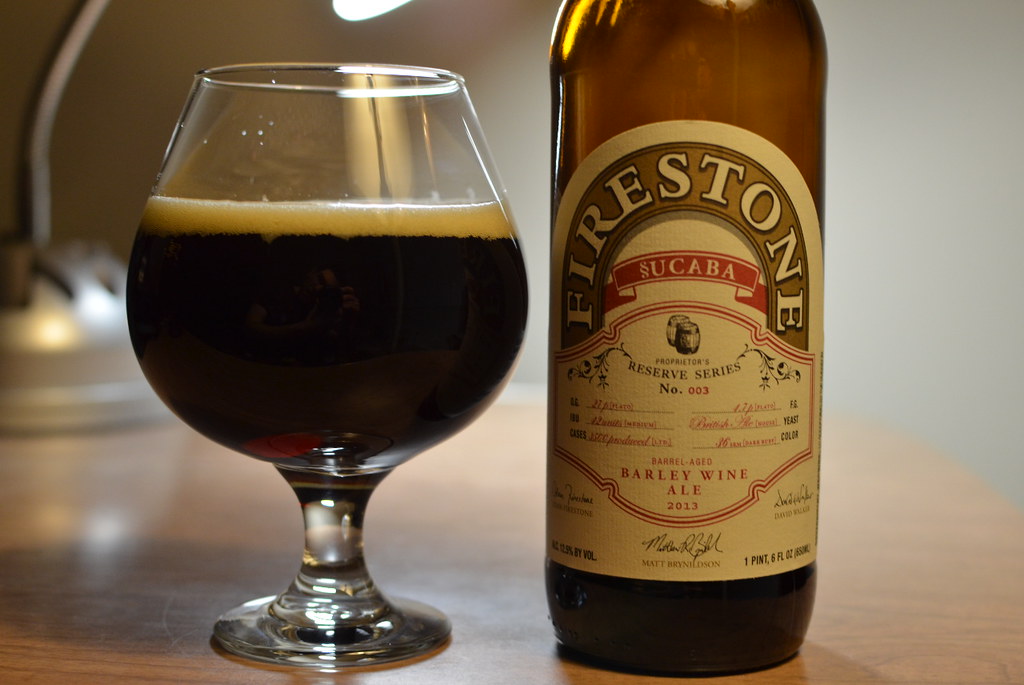 So far, so dark - beer brewed in co-operation by 2 Polish craft breweries - Ale Browar and Artezan. It's a robust porter with coffee and licorice (licorice is actually absent here). What I really like in this one is a lack of unneeded sweetness or caramel, just pure chocolate, coffee, medium bitterness and long nut-brown aftertaste.
PS. bottle is painted, not labeled <3

I recently bought one bottle of American style barleywine (big beers from Polish craft are made in seriously limited quantities) and I think should age it year or two
Jank, did this one from post above still had hop flavour?
Last edited: Apr 14, 2015
J

Not really no, it had definitely gotten into the syrupy barleywine stage, where usually a young one still has hops flavor, for an American Barleywine anyway.


Last night I had a rather amazing beer, Midnight Sun Brewing's Berserker Imperial Stout. With Maple Syrup and Molasses, aged in Oak Bourbon barrels. It was a triumph of dessert-beer flavor, one of the biggest darkest stouts I've had in a long time. The maple/molasses/bourbon flavors were not overwhelming... the head was almost black, far darker for me than this picture...

It's time to reanimate this topic, even if will be exactly not about beer, but somethingsimilar subject. Last year I've found a new hobby: mead making. Mead ("honey wine") is an alcohol beverage made by fermantation of honey wort. Today I pulled of my last mead to the other carboy after end of primary fermentation. My favorites are Paulaner, Hoegaarden and Chimay

Over here, no not there, here.

I've never had those dark ones like that Berzerker up there but they look really good.

ferrethertz said:
My favorites are Paulaner, Hoegaarden and Chimay
Click to expand...

I'd recommend Chimay Red, Blue and Triple, but Chimay Dor

I made home ice cream with a porter. It was delicious. My family said that it would be good if it wouldn't taste like a porter. Weird people
M

I Finnished my work day with sauna and sahti. Sahti is a traditional Finnish beer, which along it's "cousins" dates back at least to the 9th century, making it maybe the world's oldest beer style still alive. Traditional sahti is made of barley malts and juniper branches, sometimes with berries. Hops was introduced to Finland around 14th century, so it's not as an old ingredient.

The sahti I'm having is "Finlandia Sahti Strong": It came in a 0.75L plastic bottle, which isn't the most attractive in the world. The smell is quite mild, a bit of banana-like sweetness and a bit of alcohol. Tastes quite the same, but alcohol is well hidden. Mild and easy to drink, but may be treacherous stuff, because this beer has 10% alcohol

Interesting, I once drinked Sahti - the weirdest beer I ever saw. Sweet, thick, oily and sticky (it was with rye malt), uncarbonated and full of juniper flavour. Like a weizenbock on steroids with some crazy stuff Hi guys!
Why is so silent here? Are you now water drinkers or what? It's autumn, time to say good bye to pilsners and light IPAs and grab some beer more suitable to the weather conditions.

Few days ago I take the 90- Wee heavy from Scottish Belhaven Brewery. It's a strong ale full of bisquits, bread toasts and fruits: dried plums, figs, strawberry jam or something this type. Very sweet, liqueur mouthfeel potion, I would call it smaller brother of a good barleywine. Nice for relax

What is in your's glasses?

Wow, off i go to the Liquor store..

Utah (no I'm not a polygamist)

Sea Legs or Hop Nosh for Uinta Brewing are both pretty good as well. I love
me some Evolution Amber Ale. Mmmm

Love me some beer

Don't know much about beer. Watching the world series lol AsoBit said:
Don't know much about beer.
Click to expand...

Well, I am also not anykind of a beer specialist. I was just curious of many things so I started reading, watching reviews and drinking different beer types and finally I fell in love