As we know, North Vietnam had a lot of diferent weapons with diferent abilities, and Czech guns were amongst them. Sadly, theyre not in game yet, even North Vietnam used tens of thousands of them.

Legendary Sa vz.58. Who doesnt know this beauty? Still used after 60 years and enormously popular amongst hobby shooters, especially in America. Even it looks like littlebit as AK, its not, it have its own unique mechanism and it was very popular amongst North Vietnamese soldiers.
First rifles were delivered in 1965, it was first batch of 1500 rifles for testing, if it would fit the harsh jungle battlefield. And Vietnamese soldiers fell in love. Sadly, the production of Sa vz.58 ended in 1963, but Vietnam fell into love this much, that production had to start again in 1968. From 1969 North Vietnam get circa 15 000 rifles every year, so till the end of Vietnam war, North Vietnamese forces used more than 90 000 of those rifles, which were popular even within American soldiers, especially those from LRRP.

+ Sa vz.58 is nearly a pound and a half lighter than the AK rifles, so the soldier can run a little bit faster , which can be key to some situations in game (running to point etc.)

+ Sa vz.58 used thanks to unique mechanism not only mags, but can be reloaded with stripper clips, if you run out of magazines. It can cause faster reloading with not empty magazine , If your magazine is half empty, soldier just push some bullets from stripper clip instead of changing the whole magazine, which can be one second faster than realoading. After all, you will still have full magazine for later (Soldier can carry insted of standart ammount of magazines as AK, one stripper clip for this fast reloading situations).

+ Two types of stock. Sa vz. 58 have standard wooden stock, but also folding stock, so the soldier than can run a little bit faster with folded stock. Same as with AK. 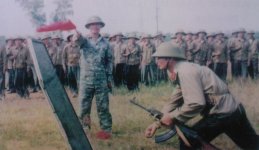 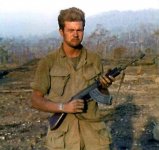 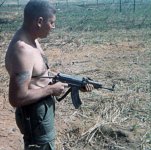 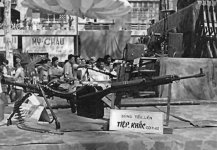 Sa vz.58 on exhibit of captured veapons in Saigon. Tiep Khac is vietnamese name for Czechoslovakia 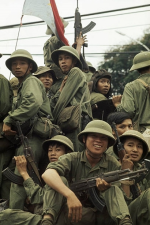 Another legendary, the Scorpion. The smalest submachine manking ever created. But its more than machine pistol with higher fire power. Scorpion was designed primarly for tank crews, thats why Scorpion is this compact. To North Vietnam was delivered more than 600 hundreds of them.

+Best pistol in game. Because its technicaly pistol, North Vietnamese commander can have it as secondary gun, and radioman as primary gun.
+Folding stock. It gives player more stability during shooting
+ Semi and full auto. Player can use it as standart pistol with high magazine capacity ( box magazine for 10 or 20 rounds) or as fully automatic pistol/sub machinegun
+ High capacity magazines. Scorpion uses two types of magazines, one for 10 rounds and other for 20 rounds, player can choose between them based on his preferences, for example two 20 rounds magazines, or five 10 rounds magazines. With smaller magazines player would have more ammunition, but in smaller magazines which couses more reloading. As interesting thing i can say, Czechoslovak tank crewmember carried five magazines (1x 10 rounds, 4x 20 rounds) 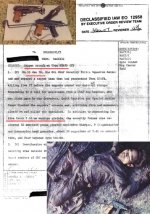 Why it should be in game?
+ Its really interesting sniper rifle with very good accuracy, thats why it was used in Czechoslovakia til 1990s, even Czechoslovaks used mainly newer Dragunov rifles
+ It gives another variety of Mosin rifles, which are curently in game. Vz.54 can be placed as variant of sniper version of Mosin rifle. 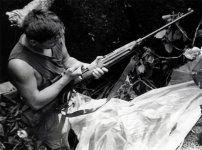 Another legendary gun. Czechoslovak guns were influentila during last century and ZB 26 is bright example, From Zb 26 was delivered one of the most famous guns of WWII, the BREN gun, whose licence Great Britain bought in 1933. However to Vietnam was delivred 1 000 pieces in 1965, but another thousands were during the war delivered from communist China, whose machinegn produced under licence. Vz.26 was used mainly by VietCong soldiers. 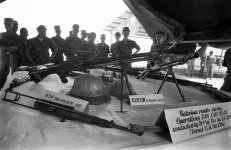 Vz.26 on exhibit of guns captured by 24th Division. 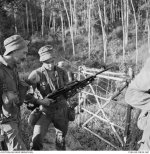 Sergeant Hugh Cross (left), of Corinda, Qld, checks that the vz.26. Australians used BREN gun in Vietnam, so those guns were almost identical, but vz. 2 had magazine for 20 rounds.

And another legend. The vz.23. Di you know, the submachine gun UZI is based on vz. 23? Sa vz.23s were delivered to North Vietnam propably in late stages of war, they can mainly be saw during Fall of Saigon in 1975. Sadly i cant post more pictures (only 10 pictures in post).

+Legendary submachine gun.
+Another option for north vietnamese Sapers, Radiomen and Scouts
+Variety of amunition. The standard, wooden stock variant was chambered in 9mm Parabellum, while the airborne variant with folding stack was chambered in 7.62 Tokarev


Of course, North Vietnam used another Czechoslovak weapons like vz. 24 bolt action rifle, but it would be pointless to add into game, becouse most players dont use them and Mosin is enough. North Vietnamese forces also propably used Uk vz.59 machiegun, which would be really nice to add into game, but i dont have enough informations about it, so i didnt post it here. They propably also used Czechoslovaz vz. 27 RPGs, which would be also nice in the game, becouse there is only RPG 75, but its only speculation and i have no relevant information about it.

I hope you like this post, i gave me few hours of completing, so i hope it would be for something. Would be very grateful for your support. Love you. ♥♥
Reactions: PsychoPigeon