So to make a long story short:

I was in a game the other night and we had 3 “Talkie Talkies” (3 week newbie’s) or as I like to call them “Would be heroes” that would not chattering about “I wish RO had this… , or I wish RO had that … , I wish RO had Tank Riding Infantry… , I wish RO had real Artillery so I could fire from behind the frontlines and support the attacks … and on-and-on.”

Finally I broke in and said “Have you Talkie Talkies ever open the RO SDK module and try to design your own map?” “Have you ever gone into the SDK module and explore what you can do with it” They said “NO.” I said “You can add Artillery & Tank Riding Infantry to the current version of RO without any new programming or creating any new models.” They said it was impossible and you would have to do new programming and changes to the base module.” My reply was “I have already done it and can prove it!”

So for those 3 little minds, with no imaginations but a mouth full of words, here is how Artillery & Tank Riding Infantry can be added to RO:OST right now!!!

Side note: (The map I will be presenting is called “State Farm 79”. It is 1 of 5 Stalingrad bases maps I was working on in 2009. With the announcement of RO:HOS I put all these maps on hold. The “State Farm 79” map is based on the December 7-9, 1942 (Chir River sector) battles between the German 11th Panzer Division (Panzer Regiment 15 & Panzergrenadier Regiment 110, 111) and elements of the Soviet 1st Tank Corp (Tank Brigade 117, 159, 216 & Rifle Regiment 1118). This area is situated southwest of the Chir River and would be referenced as the outer Soviet ring of the Stalingrad pocket. Research for this project included: 1942 soviet contour maps, Captured 11th Panzer Division documents from the National Archives (NARA), Soviet 1st Tank Corp war dairies and maps (TsAMO), numerous published books and private soldiers photo albums from the battle.)

So here we go!

So here is a real world example using my “State Farm 79” Map: I have just entered the game as a German player and gone to the overhead map. I have drawn a blue “X” to show where the 3 Gun of “A” Battery are located and blue lines to show arc of the Guns to aid in this instance. Because of its position on the map the German Battery can fire on the 4 most northerly targets/villages including Soviet artillery positions (Counter-battery fire). A German FO (Forward Observer) has driven a APC (Armored Personnel Carrier) forward to spot targets for the artillery Battery, shown as a purple line. Once in position west of State Farm 79, the FO looks for probable targets sites within the village. The FO visual binoculars range is shown as a green arc. 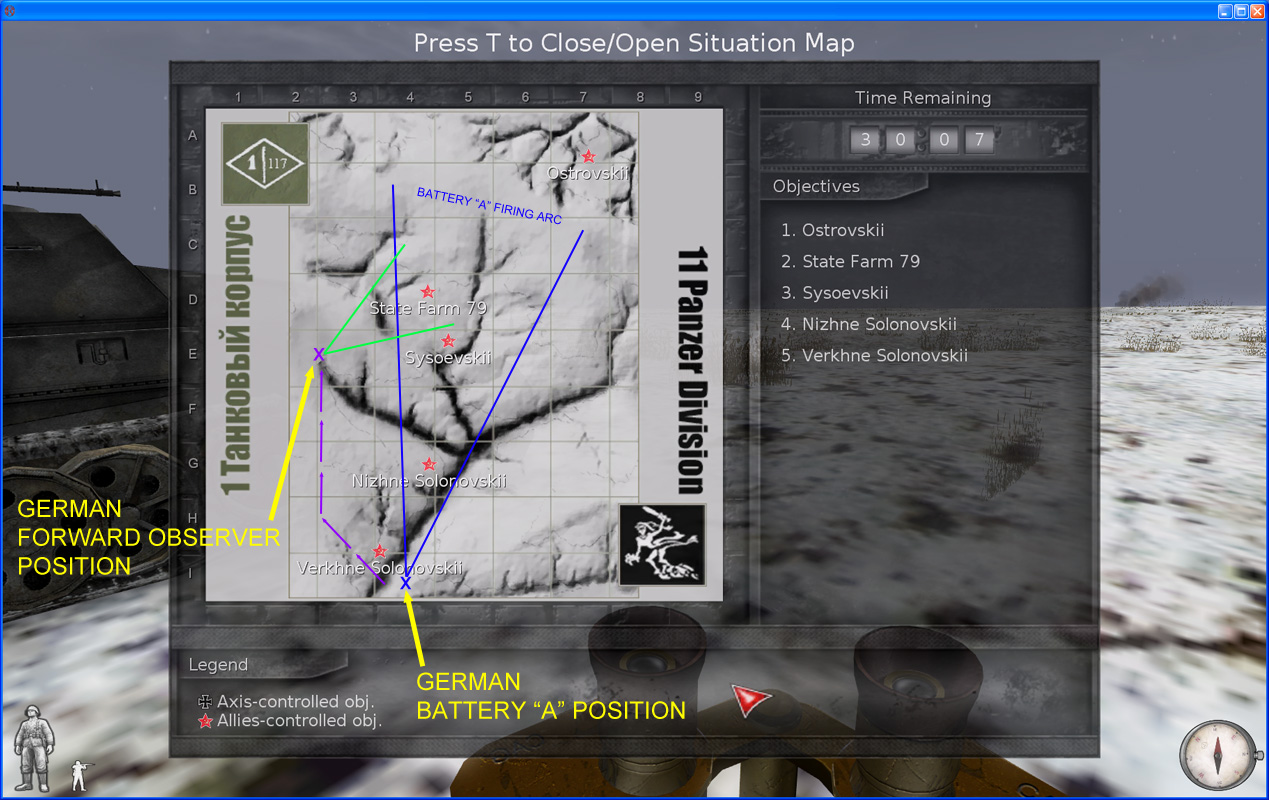 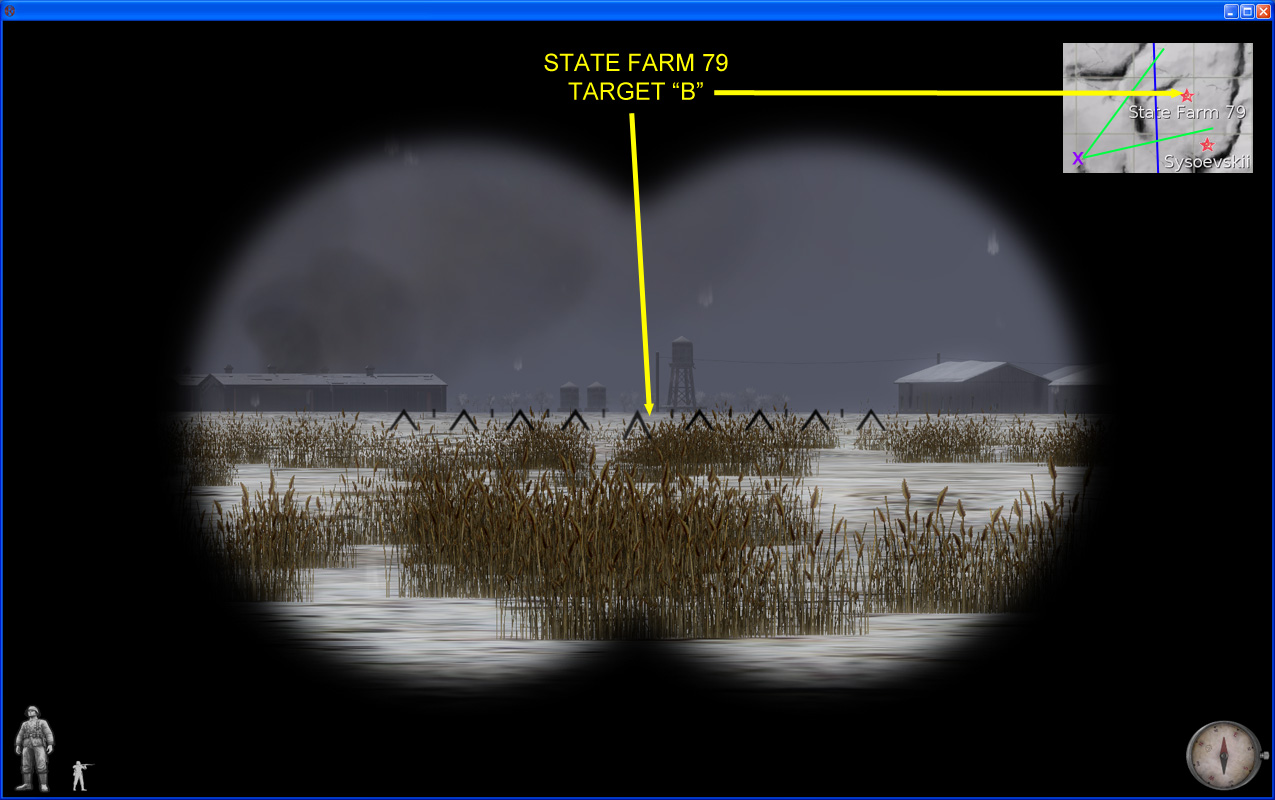 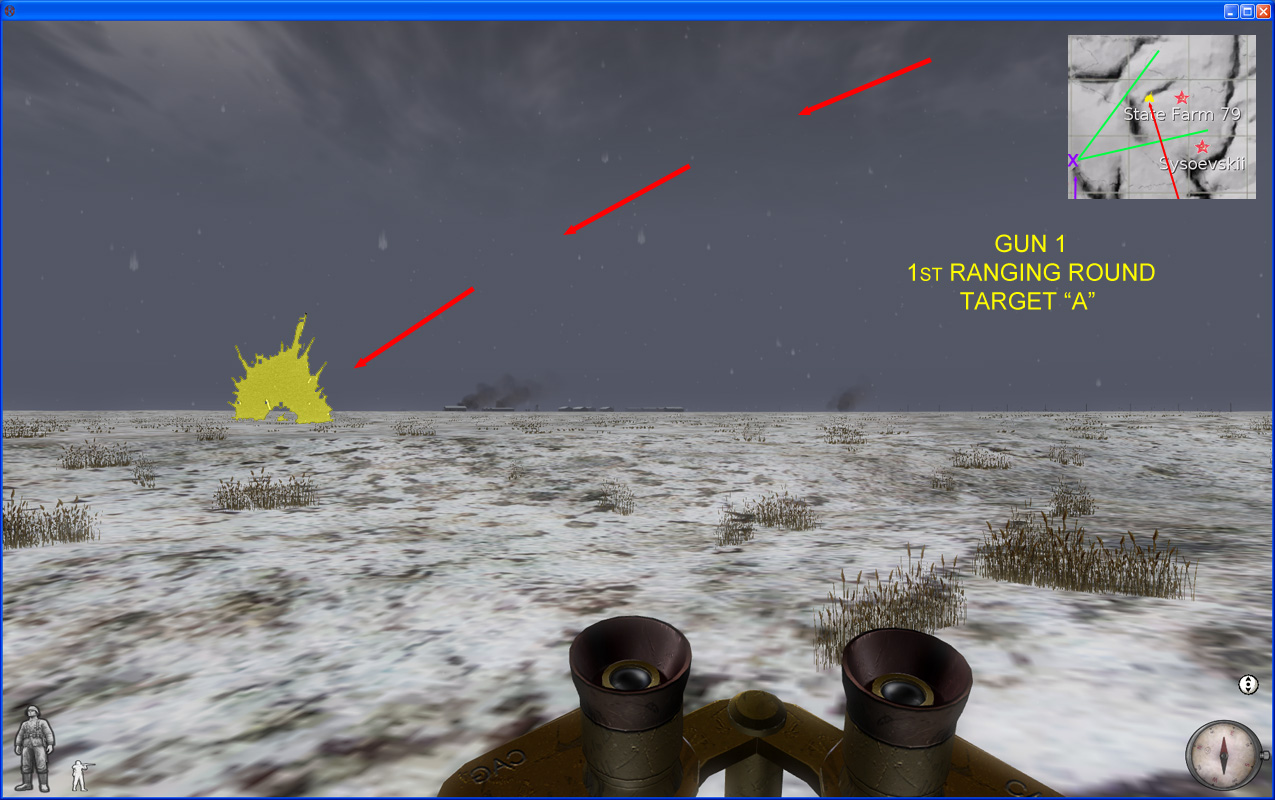 ………..wait for it ………Boommmm! Now the FO tells the Battery Commander how to adjust for the next ranging round like saying “Elevation two ticks (Marker) shorter (lower), Angle 4 ticks (Marker) to the east (Right). 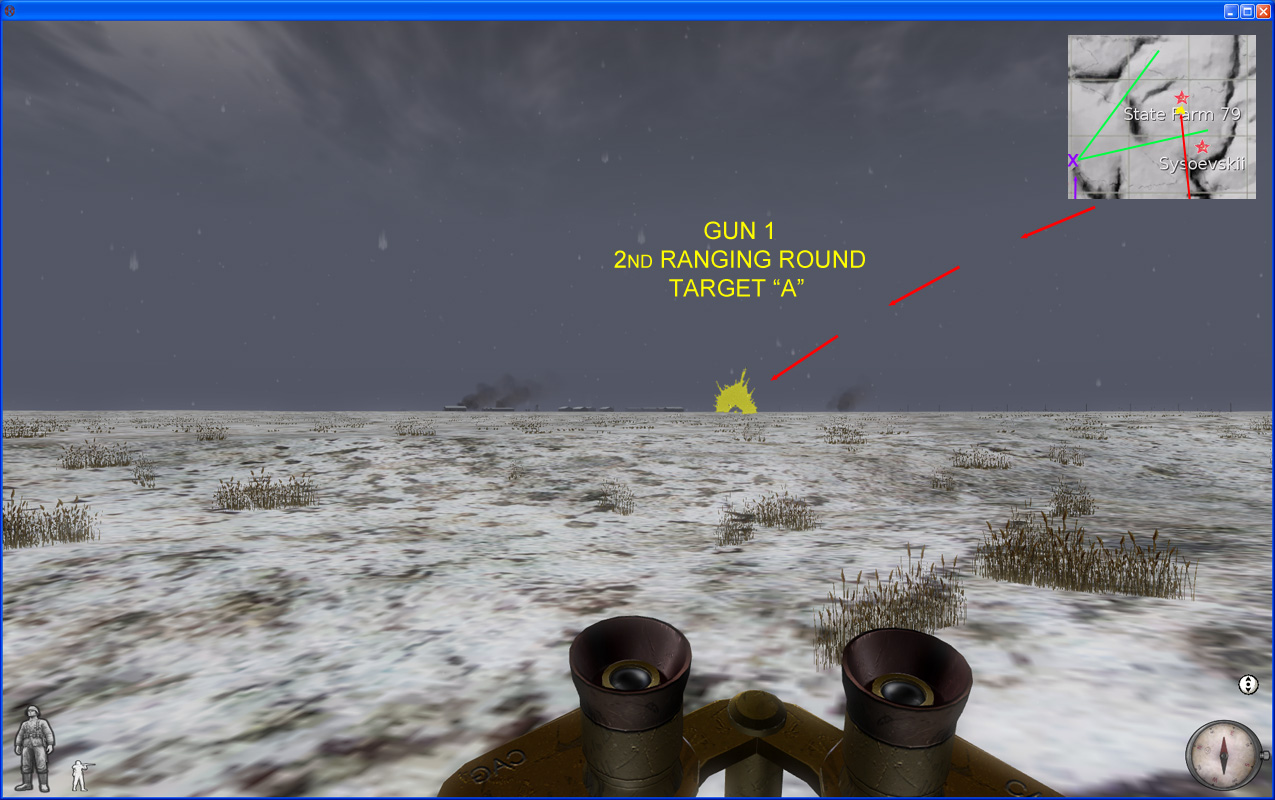 The Battery Commander (Gun 1 only again) fires a thrid HE round downrange and says “1 HE ranging round inbound target A”. Wait for it, wait for it ………………… 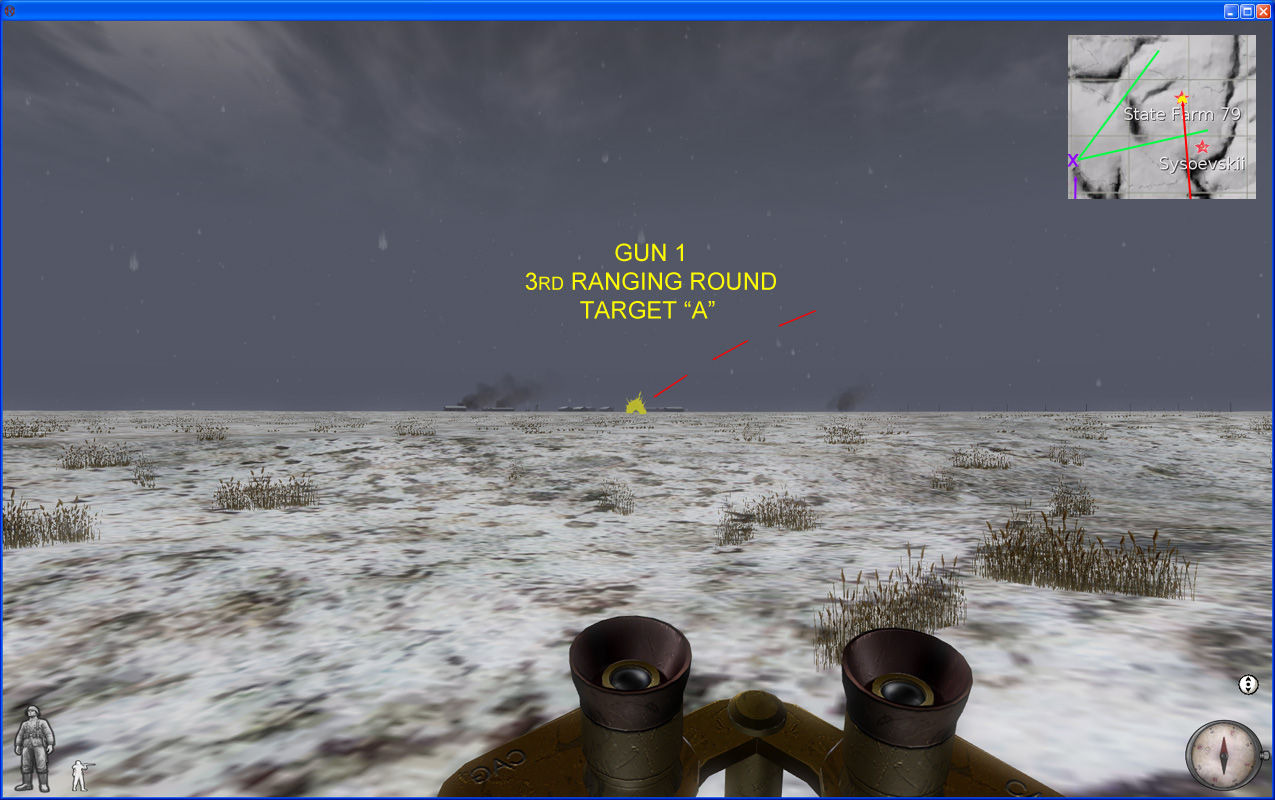 [Close up VIew thrid round] 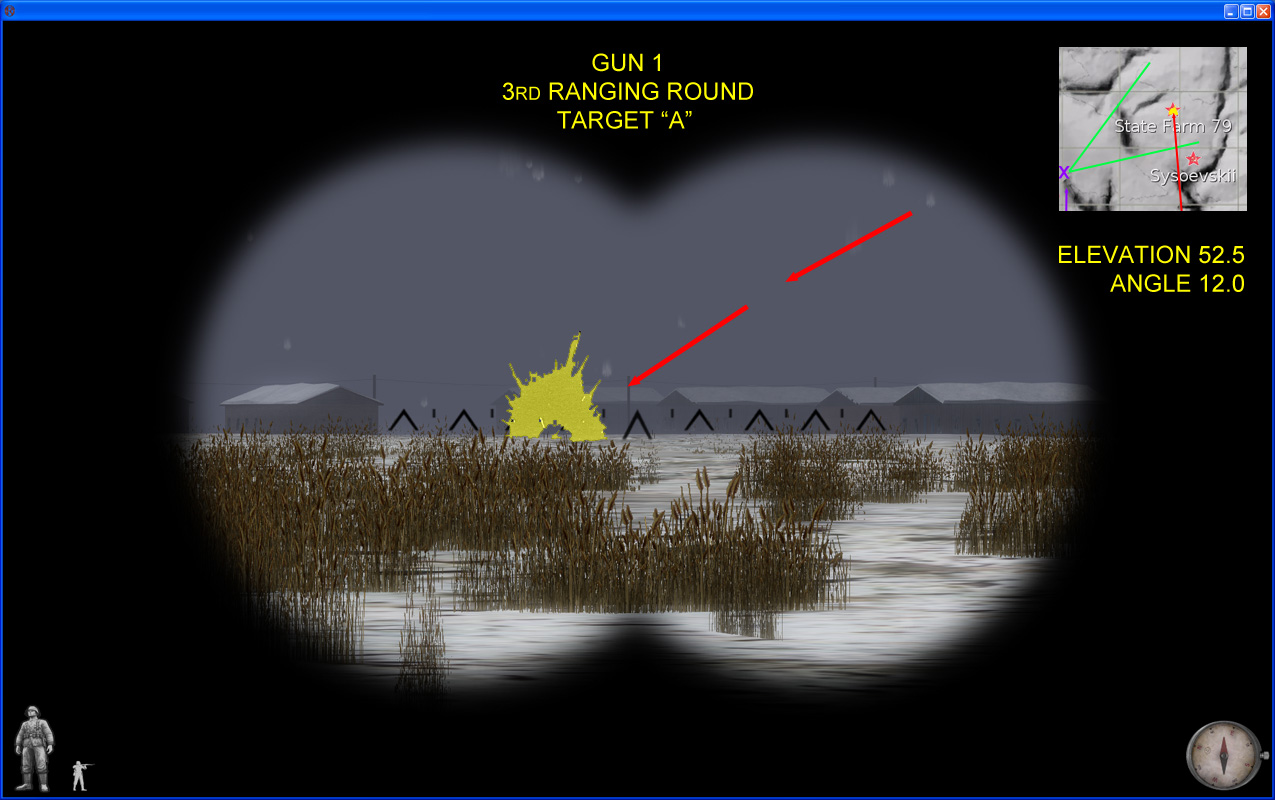 It’s really that easy. I tested by myself and it worked great. I created a Russian unprotected spawn area in the northern most village on the map and once I was able to zero in my Gun 1 (It took me 20+ rounds because I didn’t have a FO LOL) I was able to kill Russian Infantrymen with all three Guns from the Battery. 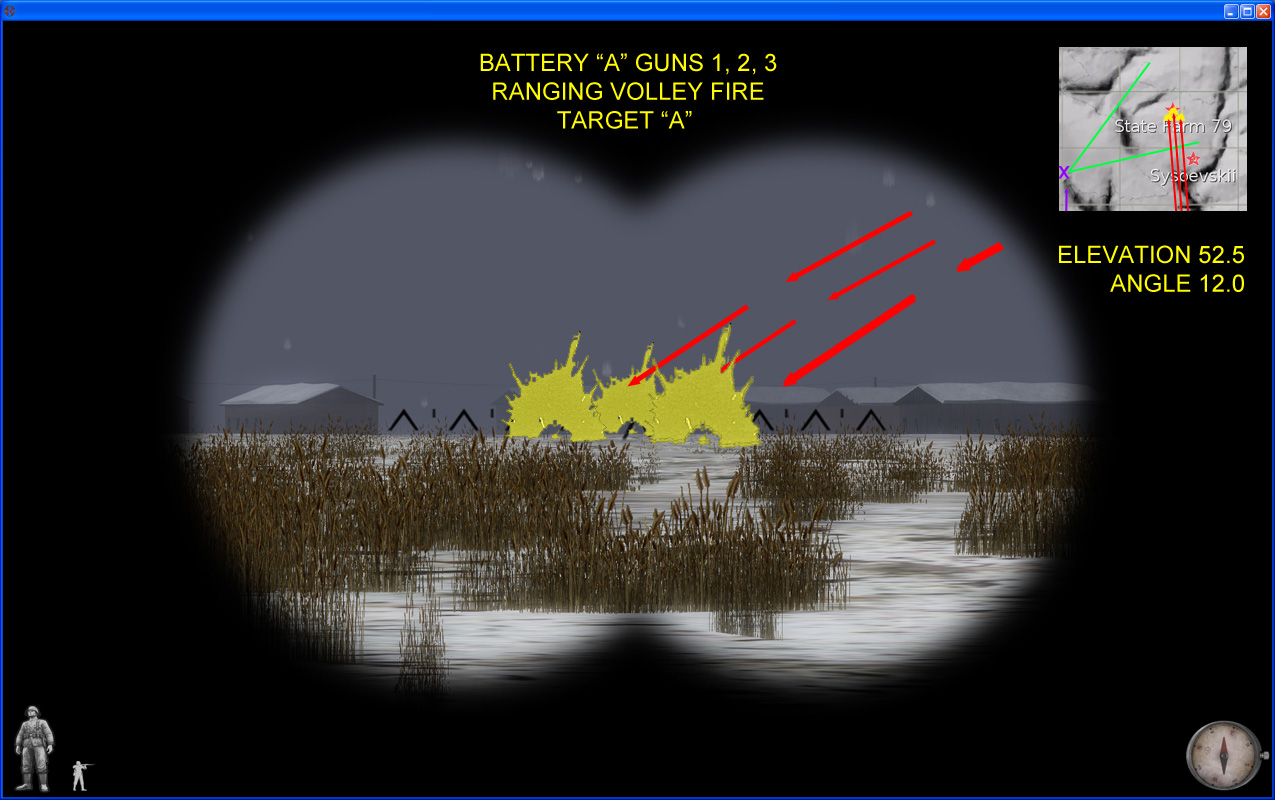 In the Final release of “State Farm 79” (Advance Mode) I envision the artillery Guns would not start in a fixed static position like I have shown above but Gunner would have to drive gun in position just like setting up an artillery position in real life. The Guns would start 180 degrees (backwards) from the aiming cross but would still be locked into the shown sandbag bunker area so they could not enter the battle as direct fire support. It takes less than 1 minute to get Gun into position. 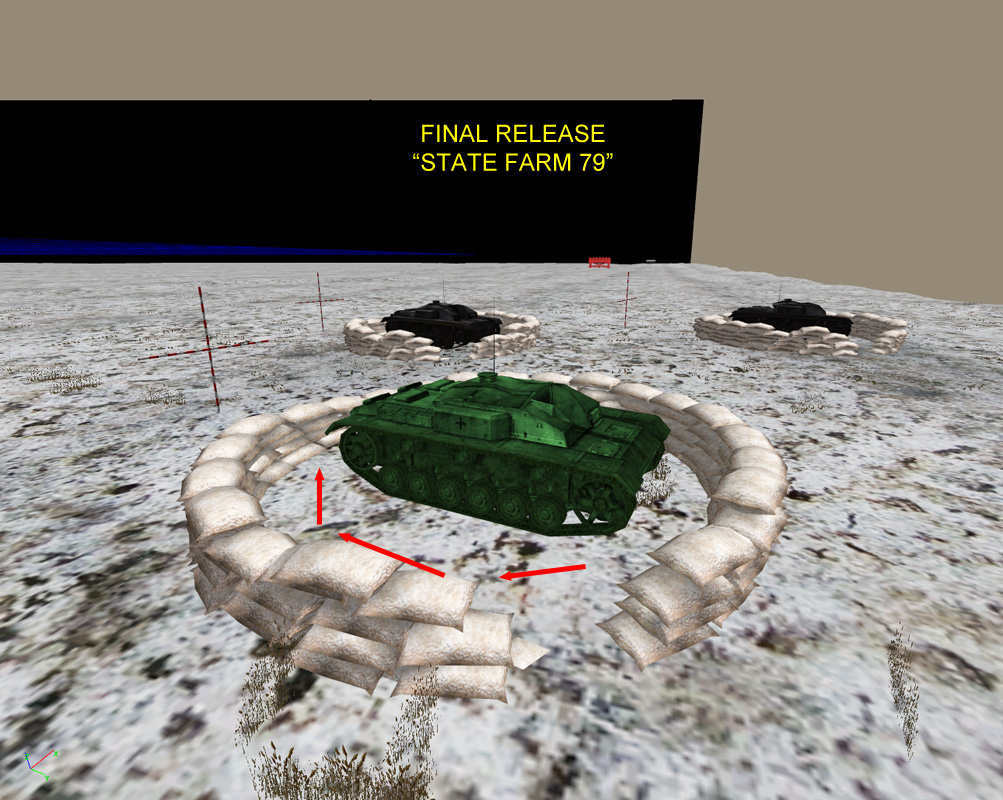 Don’t worry, the Soviets have Artillery too and it works the same exact way! 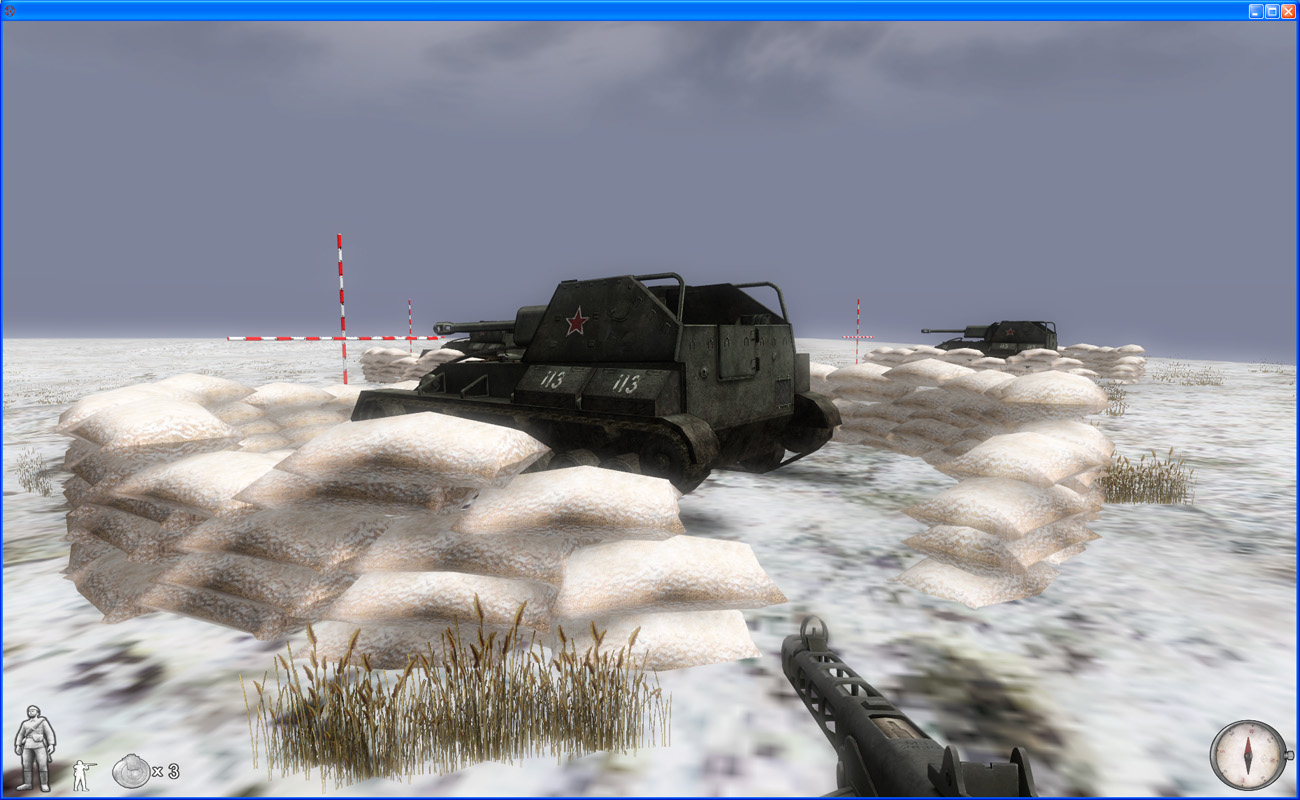 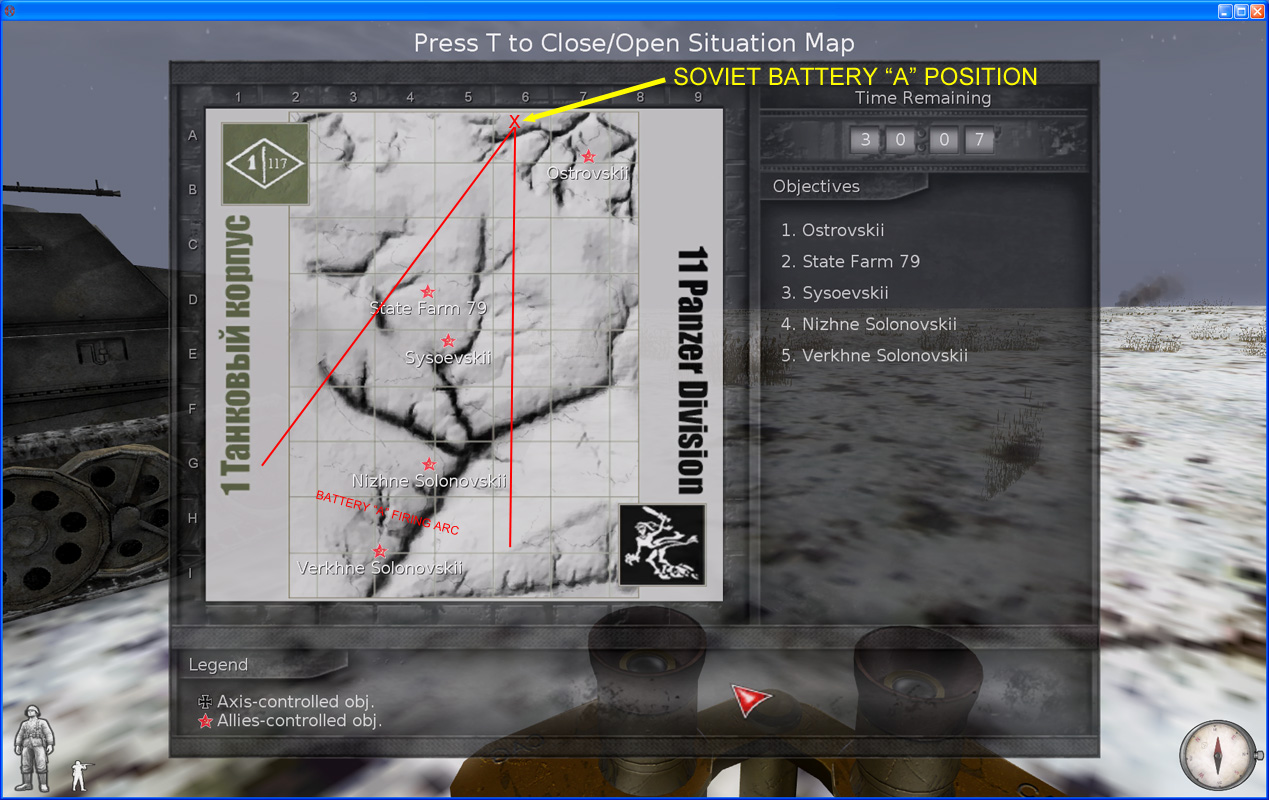 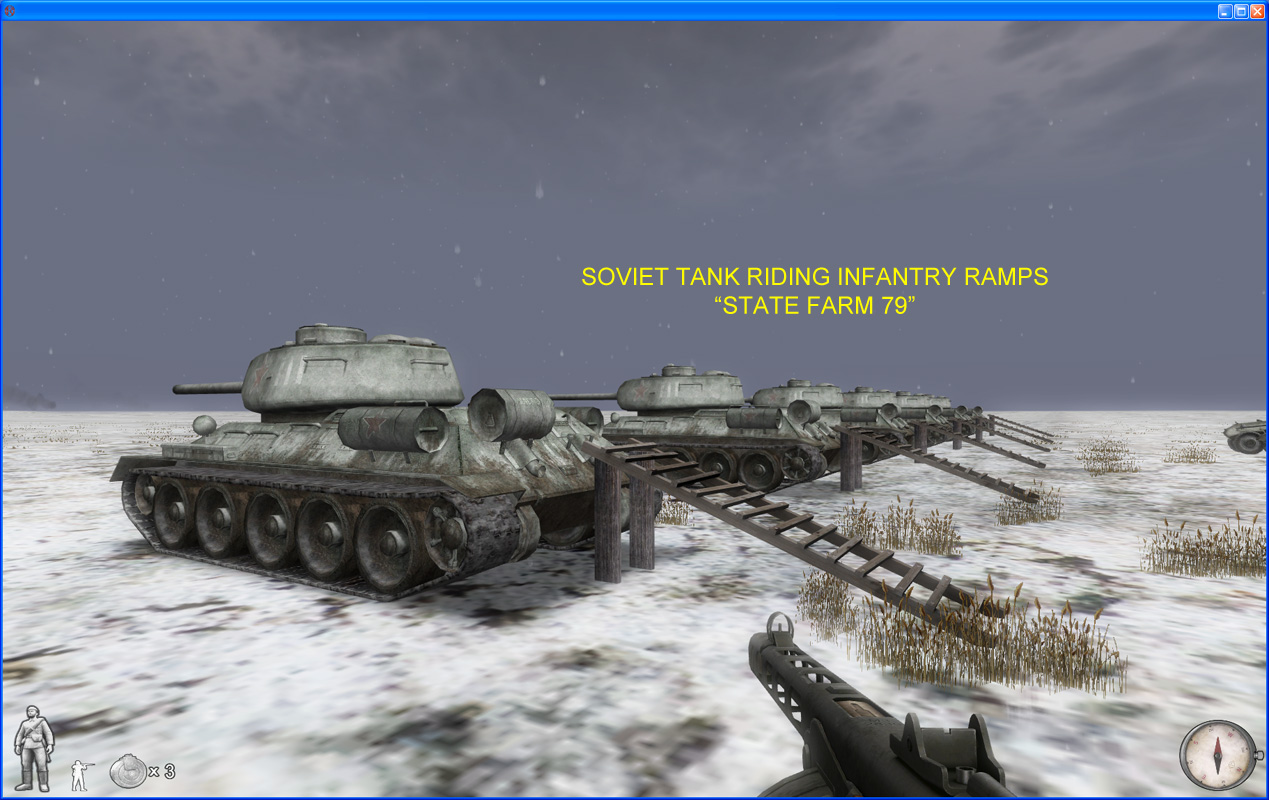 You can fit 6 soldiers on the rear easily but you could have as many as ten because you can crawl to the side and front fenders, as long as the turret does not move and knock you off. Ramps only available in Soviet spawn location 1 on my map. 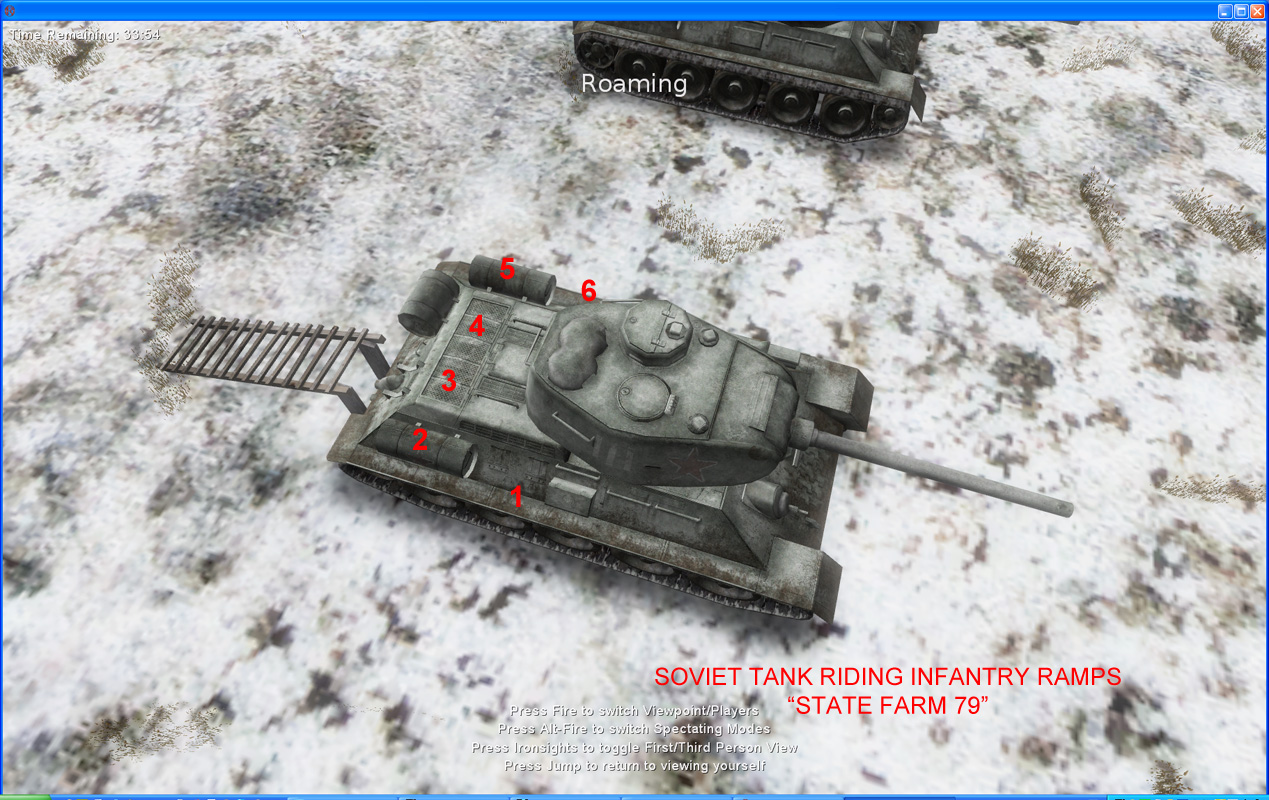 I hope everyone enjoyed this. Some solutions/answers are so simple if you just open your mind.

Crazy is the new genius .

In some existing maps there are already static AT guns, but the idea is good...

Correct but the calibers are too small. I try repeatedly to get the ISU-152 into my map but had no luck.