You are using an out of date browser. It may not display this or other websites correctly.
You should upgrade or use an alternative browser.
H

Of course, this M1943 has many sub types according to different production years and factories, but they all have a Hexagonal Turret. Here are some more pics:

Late version (with a commander observing cupola on the left top of the tank turret)
(Notice: The tank in this picture has a hull from the T-34-85 M1945, which is not exactly the same as the T-34 M1943's hull. But the turret is perfectly currect in this picture. )

This M1943 is produced since the late 1942, and has the greatest production among the T-34 family.

The total production of the T-34

I hope to see this most famous Model of T-34 running in RO soon. It's more important ot employ such a mass produced vehicle than anything else.

More pictures of the T-34 M1943 Late Version (with a commander observing cupola on the left top of the tank turret):

Just how different are these models in practical terms? Same or different gun? Same or different hull armour/ turret armour?
If they're significantly different, then sure. If the differences are only or mostly cosmetic, then why bother? We'd be better of to see new early war vehicles like Pz38(t) or BT-7 instead.
H

Of course different in armor thickness. And the most different is their appearance! That's totally another turret (Though with the same gun). They are in different shape, look at the picture. The difference is far greater than that between PzKpfw IV H and PzKpfw IV J.


Practically speaking? Probably no different, really. The gun was the same 76.1mm gun that the 1941/1942 model used, I think. I seem to recall there being a slightly different model gun on the T-28, but I think they upgraded that with the first T-34s.

The hex turret wouldn't matter really, because the game doesn't model turrets as separate from the hull. If it did, the hex turret might make a difference and (I think) is better armored. The addition of a commander cupola would make a slight difference, but only a slight one. I find cupolas generally to be pretty useless because you can't look closely through the slits. The hatch differences might slightly improve visibility when unbuttoned, but again, only slightly.

If they're significantly different, then sure. If the differences are only or mostly cosmetic, then why bother? We'd be better of to see new early war vehicles like Pz38(t) or BT-7 instead.
Click to expand...


While I agree that the game would be far better served by focusing on early war armored combat (given how different it plays out from mid-to-late war combat), I think the difference here would be -- in terms of what you the player see in game, not simply the number crunching -- about as significant as adding the later model Pz IV that the devs did a little while back. In other words, not a lick of difference.

I raise this mostly to point out how silly all of the "ZOMG!! ADD THE [insert practically identical german tank here]!!!" requests that you see from time to time.

But yeah, early war stuff instead, please. Once we finish with that, sure, add the 1943 T-34 model. I'd love to see some more Russian gear rather than yet ANOTHER German variant.
F

Likely there is no sense it to do. The majority of distinctions T-34-76 depends on the equipment which had factories. It depends on that what variant more cheaply. Sometimes more cheaply welding, sometimes is not present. Some turrets were more convenient for crew. But atronges was approximately identical.
Here one of variants. 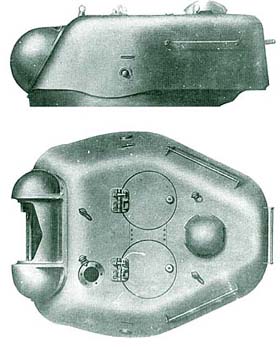 This turret produced from one sheet of the armur . With using 1000t press . Unfortunately the Soviet industry had deficiency 60 mm armur , It was necessary to make it 45 mm . But it was same strong.
Last edited: Feb 22, 2007

The biggest difference between them was that the M43 has a cupola.
H

Yes, these are all T-34 M1943 (according to US classification system). The one below is produced by URALMASH Factory with a special 5000t press equipment, so that the turret is rounded. ( Front/side/rear/top armor are all pressed from one armor sheet, only that factory can produce such turret.)

And the picture posted by FatPartizan is the same URALMASH Factory turret, and he told you how they press and make it. That's a famous sub type of the T-34 M1943.

And a little more difference: This new Hexagonal Turret can carry an ammunation of 100 rounds, while the old M1941/42 turret can only carry 77.

Though the sub types of T-34 M1943 (according to US classification system) are numerous, we need only one in the game, whether with or without a cupola does not matter. Because many tanks had their cupolas added in field by crews rather than in factory by workers.
Last edited: Feb 22, 2007
E

Come to think of it, after looking at those photos I think the in game T-34 looks too clean and boring looking. It doesn't have that rushed, cheap russian, badly welded and rough edged look to it.

But anyway I say fix the bloody Tiger and T-34 gun first before this.

[edit] is it just me or is that a crack in the turret of the second black&white photo in the first thread?[edit]
H

Elysium said:
[edit] is it just me or is that a crack in the turret of the second black&white photo in the first thread?[edit]
Click to expand...


No, I see no crack.......
The Russian armor is rough in the surface, because it's casted, but it's not cracked. Actually, the armor steel is stronger than the Germans', especially in the late days.
N

well it was stronger in thery, in practise it was very uneven in quality due to pore quality controle. particurly durring the early days, and you still have to note that it was far harder then all other armys cast armor (and most RH armor).

however there is not a hole lot of diffrence in the two models to realy warrent the addtion of the "newer" model
the only armor change is the turret face that went from 52mm to 70mm. and besidesd the cupola nothing will change ingame
H

Here is a picture shows the 3 main variants of the Hexagonal Turret:

These are all cast hexagonal turrets, not the pressed URALMASH turret.

I know you may not care about all these differences, but the turrets are TOTALLY DIFFERENT IN APPEARANCE! They are not the same tank! As PzIV H is added in addition to PzIV F2, this T-34 M1943 should be added too.
Last edited: Feb 22, 2007
V

Not a bad idea... BUT! There are only so many tanks in the game as it is that having three of the same type would be pretty boring. I'm sure the T-34 fanboys already have stuff to play with.

Let's have some new tank types instead: a representative of the BT-series, Panzersp
S

Exactly. This kind of request is like the "Add an MG to the Stug III" requests or the "add this minor variant German tank."

While treadheads may love these little differences, in the end, at least as far as what you'll see in gameplay terms, the distinctions are purely cosmetic and have very little by way of practical effect on the game.

I personally think the Pz IV H did exactly squat as far as gameplay is concerned. It doesn't seem all that much more or less durable than the Pz IV F2, nor does its gun seem all that much more powerful. The main difference seems to be the schurtzen, which helps against the odd PTRD attack and the new camo, which basically could've been handled by a simple skin job for the Pz IV F2. While I'm happy to have the H in the game, I can't help but wonder if that same time couldn't have been spent on creating more diverse gameplay, rather than "more of the same".

At this point, I say its time to diversify the game. The mid- and late-war armor is reasonably well represented. We need early-war stuff now.
K

Vonreuter said:
Not a bad idea... BUT! There are only so many tanks in the game as it is that having three of the same type would be pretty boring. I'm sure the T-34 fanboys already have stuff to play with.

Let's have some new tank types instead: a representative of the BT-series, Panzersp
Click to expand...

So RO has become a gameplay concentrated game.

We can have Mosin Nagant M38 and M44, we can have some British universal carrier, but we cannot have the Medium Tank with the greatest production during the war. If someone think 2 types of T-34 is too many, then should the original T-34 M1942 be deleted, for its production was less.
You must log in or register to reply here.
Share:
Facebook Twitter Reddit Pinterest Tumblr WhatsApp Email Share Link
Top Bottom