Black April ( The Fall of Saigon )

The Fall of Saigon was the capture of Saigon, the capital of South Vietnam, by the People's Army of Vietnam (PAVN)
and the National Liberation Front of South Vietnam (also known as the Viet Cong) on 30 April 1975.

On the American side, reports came in from the outskirts of the city that the PAVN were closing in.
At 10:48 a.m., US Ambassador Graham Martin relayed to Kissinger his desire to activate "the FREQUENT WIND" evacuation plan;
Kissinger gave the order three minutes later.
The American radio station began regular play of Irving Berlin's "White Christmas," the signal for American personnel to move immediately to the evacuation points.
Under this plan, CH-53 and CH-46 helicopters were used to evacuate Americans and friendly Vietnamese to ships, including the Seventh Fleet, in the South China Sea.

PAVN had occupied the important points of the city and raised their flag over the South Vietnamese presidential palace.
The event marked the end of the Vietnam War and the start of a transition period to the formal reunification of Vietnam under the Socialist Republic of Vietnam.

You are being placed in the point in time when the outskirts of Saigon fell,
PAVN were moving in the city and the Americans began broadcasting a signal for evacuation.

For the attackers, I set PAVN forces and for the defenders, I set the US Marines cause they would be the ones guarding the Embassy!

American Embassy -
The Biggest evacuation point was from the roof of the American Embassy.
Surrounded by traffic jams, Americans have to destroy all the documents, firepower and help evacuate half a city!
Ammo is placed in the iconic POOL BEHIND THE EMBASSY where all who managed to cross the main gate had to drop their weapons and ammunition before they could be evacuated.

Notre Dame Cathedral -
Caught by surprise Americans bunkered them self up at the entrance to Cathedral with a couple of trucks and sandbags
Ammo is in the American improvised bunker, but the area around is wide open leaving attackers lots of space to choose how they want to attack.
They can move through the park, wrecked city ruins, snipe the defenders from rooftops etc.

Pittman Apartments -
Set as one of the evacuation points the Pittman apartments is rather famous for two things:
1.One of the most famous photographs during the fall of Saigon â€” the one of the helicopter precariously perched atop a building,
with the pilot leaning out to help a long line of refugees scrambling up a steep ladder.
2.The top Apartments was where CIA officers had stayed in Saigon and many believe it was the CIA base of operation.
That's why you'll find the last floor in the map with documents scattered around and burned in every room!
The nearest ammo is at the Cathedral and the Presidental Palace Tunnel entrance.

Presidental Palace -
Best known for several things:
1.Last point of resistance, once the PAVN entered the palace they TOOK the power (not excepted the surrender of the president) over Vietnam which ended the war!
2.Also one of the famous photographs during the fall of Saigon â€” the one when a North Vietnamese Army tank crashed through its gates.
You can actually see the Video of it in the main menu of RS2, and also the PAVN waving a flag at the recognizable pillars of Presidental palace.
3.It was a command center for the war, with map rooms etc.
4.It had a secret escape tunnel under the palace.

ABOUT THE MAKING OF THE MAP:

The Presidental Palace and part of the Notre Dame Cathedral have been modeled out and unwrapped to use RS2 materials/textures to save shader space and to gain access to vertex painting.
The tanks used in the map are T-34 which were used in the beginning of the Vietnam War and were imported from RO2,
those are not the ones that breached the gates but considering I didn't have time to model them out they are the closest thing I had.
For copyright reasons I removed all actual names from the objectives like, Notre Dame Cathedral is now Cathedral, Pittman Apartments is Apartments Evacuation Point.
I was gonna have Irving Berlin's "White Christmas playing on the radio in the homes or random people around town but copyright doesn't allow it.
As for the gameplay itself, that's where all you RS2 Pros come in...Testing is one of the most important parts of making a good gameplay...so report any bugs,
leave comments or ideas how would you improve gameplay in the workshop section of Black April!
Thank you for reading all this and I'll see you in-game!

looks great! will set it tomorrow on the POWERBITS GAMETEAM MIXED SERVER

Pretty cool so far, appreciate the effort you've put into the landmarks it's starting to feel like Saigon. Some initial feedback:

Hey Psycho, it's a nice idea for the embassy. However can't seem to open other pictures you posted.

I turned them into just links to click instead of embedding the images, seems like a problem with the forum.

Ye that works great, thx for the feedback!

recieving server crashes ... a member called recon and all crashed... can you check pls?

I checked on 3 other servers as commander of both teams, anything I call for works like a charm over!
I still have to check your server but it looks like the bird is shitting in your yard over and out!

it does not crash all the time, but it does crash... bird or not

crashed again today, no bugsplat ..server froze... cant use this map till its fixed

Can I please have the log so I can see what the issue is?

I have received all your feedback and would like to thank you for it, especially people that took the time to play the map a couple of times before writing one.
I know constructing feedback takes time to write and I'm thankful to all of you for finding that time!
Since you all requested it, I'm modeling out the inside of the Cathedral as we speak,
Am also taking the time to model the cathedral to around 90% accurate to the original.
I plan to expand the B objective across entire cathedral which will make the B objective perfect gameplay wise.
The plan is also to open up the upper floors to the embassy as Psycho Pigeon suggested above, and now that I've seen how different players think in the game, I can remove the actual "BASIC" gameplay code and set up the one that will be more to your liking.
Of course, modeling and making changes take time so don't expect the update just yet.
In words of an independent developer...It'll be done when it's God damned good and ready!
I'll leave you with a couple of screenshot of the new Cathedral..."work in progress"

I am happy to say, we have no more crashes.. its a realy fun map and i hope you improve it even more. Many thanks, its running in the POWERBITS GAMETEAM MIXED 60HZ

If everything goes as planned the new update should come in a week or so and will solve that server crash problem.
Cathedral modeling is finished and in fact, it's already in the engine.
Hopefully, I can spend this whole week in the SDK to tweak the map according to the given feedback, 14 hours light build, private server testing and it should be good to go.
Would like to thank "[40-1] Status Quo" for the server log that helped me figure out that crash issue.

now its also because of the patch , there are a few other custom maps involved. Can you at least rebuild it?

Yeah, I've noticed there is some problem with custom maps after 1.6 updates.
I'm sure TW and AMG are working hard as they can to resolve that issue.
Just rebuilding the old version wouldn't solve anything I'm afraid, you'll have to wait till I finish this update...but trust me, it will be worth the wait!

TW and AMG wont solve the issue on the custom maps, its the modders that have to rebuild it with the latest SDK. But ok i wait for your update 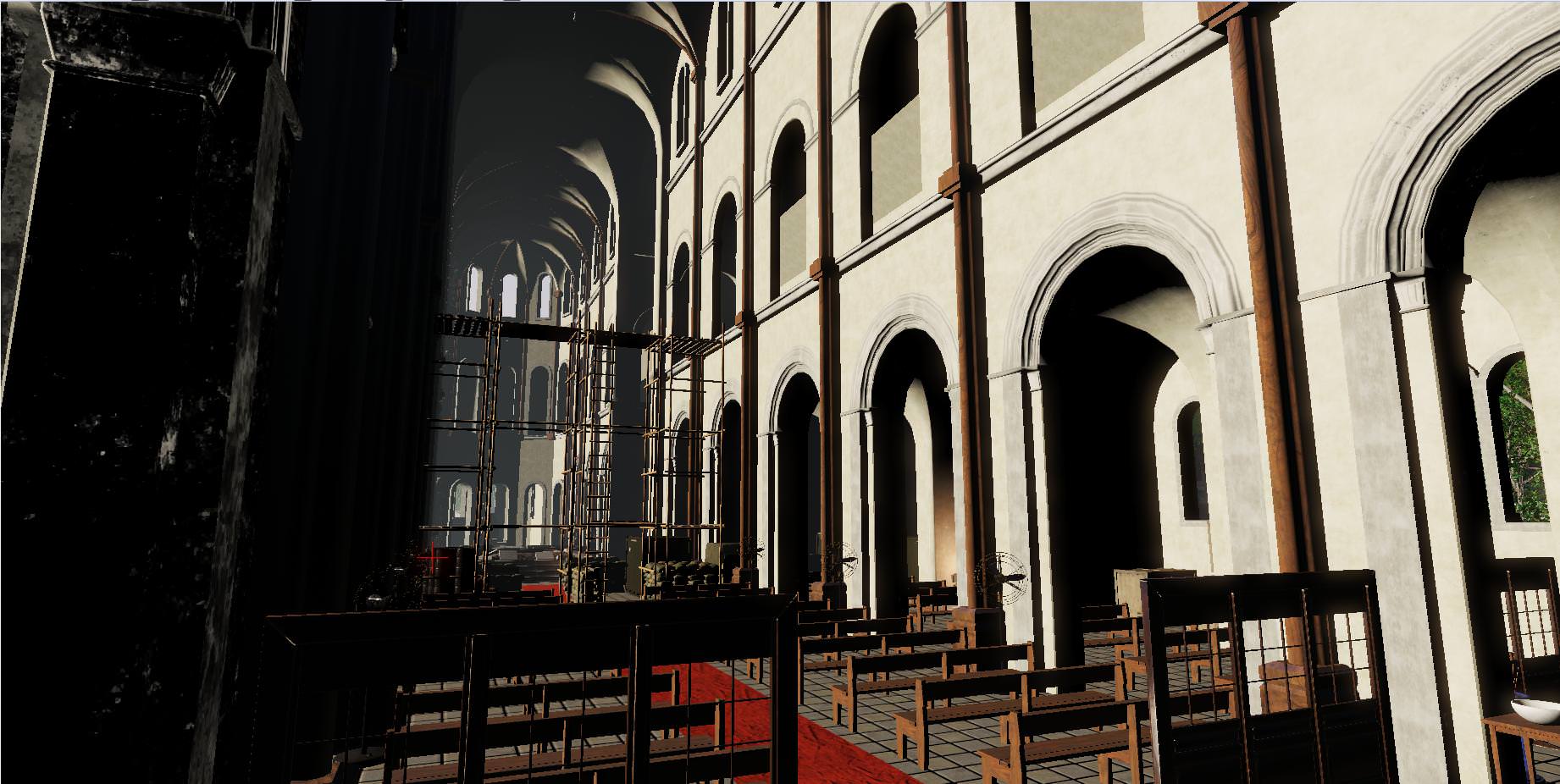